Man City exact revenge on PSG with 2-1 win, Inter back in last 16 after 10 years 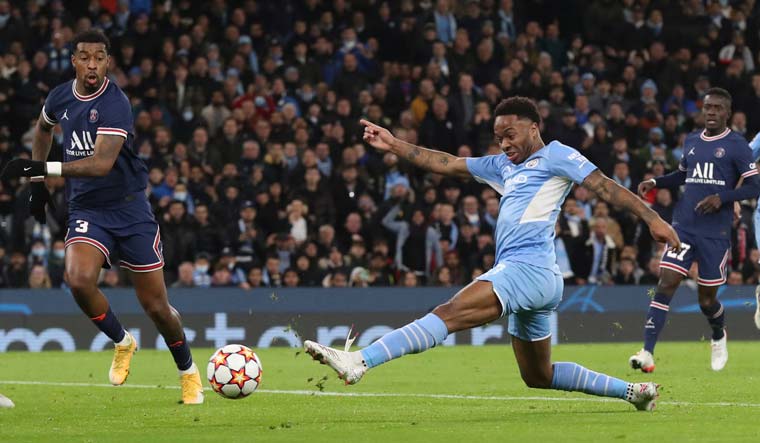 The parade of European powers advancing to the Champions League knockout stage was disrupted by Sporting Lisbon completing a stunning turnaround to join them.

Manchester City and Real Madrid are back in the round of 16 after beating teams they lost to in September. Paris Saint-Germain also goes through despite its 2-1 loss at City after leading when Kylian Mbappe scored early in the second half.

Madrid's 3-0 win at Sheriff—avenging a 2-1 home defeat to the champion of Moldova two months ago—included a goal for Karim Benzema on a day of legal trouble for the forward and ensured Inter Milan also advanced from Group D by beating Shakhtar Donetsk 2-0.

Three-time European champion Inter returns to the round of 16 after a 10-year absence, though Sporting ended a 13-year wait by beating Borussia Dortmund 3-1. Pedro Gonsalves scored twice.

✅ Confirmed round of 16 contenders so far...

Predict who will go all the way 👇#UCL pic.twitter.com/IiCEv2n4pc

Sporting seemed overmatched in September when routed at home by Ajax then beaten in Dortmund, but three straight wins lifted the surprise Portuguese title-winner to advance with a game to spare.

"Teams grow," Sporting coach Ruben Amorim said. "It's great, good for the project, but we still have a lot to do."

Ajax's 2-1 win at Besiktas came thanks to two goals from record-setting forward Sebastien Haller, who came on as a substitute. Haller has now scored in his first five career Champions League games and is the fastest player to get to nine goals in the competition.

Liverpool cruised to a 2-0 win over Porto and moved an astonishing 10 points clear of the Portuguese team in second place in Group B that promises a tense final round on December 7.

AC Milan is still in contention after finding an 87th-minute goal from a 30-year-old Champions League debutant to win 1-0 at Atletico Madrid. Junior Messias's goal left both teams on four points with Milan next hosting Liverpool and last-place Atletico going to Porto.

Leipzig was missing American coach Jesse Marsch, who tested positive for COVID-19, yet overwhelmed Club Brugge 5-0 in Belgium in their battle to finish third in Group A behind Man City and PSG.

Third-place teams in Champions League groups earn a ticket to the second-tier Europa League knockout playoffs in February. Dortmund and Sheriff will be among them.

Lionel Messi, Kylian Mbappe, Neymar. PSG coach Mauricio Pochettino was able to pick his superstar forward line to face Pep Guardiola's Man City, who were without a typical centre forward or Kevin De Bruyne because of a COVID-19 infection.

City still had enough despite failing to turn first-half dominance into goals and falling behind to Mbapp's goal in the 50th.

Raheem Sterling struck with a classic City tap-in goal in the 63rd and, after Neymar wasted a clear chance, Gabriel Jesus won it in the 77th with a scuffed shot that beat PSG goalkeeper Keylor Navas.

Pochettino eliminated City from the Champions League in the same stadium as Tottenham coach three seasons ago, and there is speculation he could be back in Manchester soon as United coach. Both Manchester teams have won their groups and will be seeded in the Round of 16 draw.

Inter Milan is heading to the Champions League knockout stage for the first time in 10 years.

Milan went to Atletico with only one point from four Group B games and would have been eliminated with a loss. The late goal from on-loan Brazilian journeyman Junior Messias was the biggest success of my life, he said.

Inter had an easier time at San Siro against Shakhtar, with veteran forward Edin Deko scoring twice in a six-minute spell midway through the second half.

The top scorers in the Champions League this season are three superstars, a newcomer and an uncapped striker.

Sebastien Haller, in his first season in the elite competition at age 27, joined Robert Lewandowski on nine by scoring both Ajax goals at Besiktas.

The former Eintracht Frankfurt and West Ham forward is now the fastest ever to score nine goals at the start of his Champions League career. Haller has taken just five games, two fewer than Erling Haaland needed across two seasons for Salzburg and Borussia Dortmund.

Christopher Nkunku also scored twice Wednesday and now has seven this season for Leipzig, one more than Cristiano Ronaldo's tally for Manchester United and Mohamed Salah for Liverpool.

It's been a breakout season at this level for Nkunku, who at age 24 has not been selected for the France national team.

Haller was born in France, like Nkuku, and played for the under-21s but later switched eligibility to represent Ivory Coast.

Salah now has 17 goals in all competitions this season after getting Liverpool's second at Anfield against Porto.