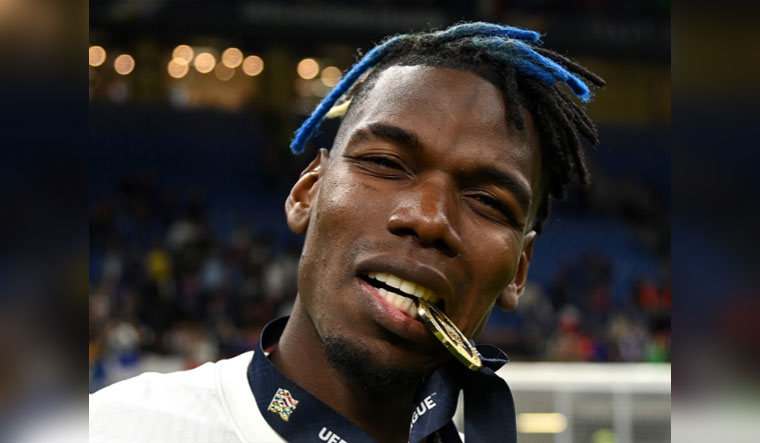 Paul Pogba will miss France's World Cup qualifiers against Kazakhstan and Finland because of a right thigh injury, the national team said Tuesday.

Video footage on French media showed the Manchester United midfielder pull up after taking a shot in training on Monday, before hobbling away.

Jordan Veretout has come into the squad as a replacement for Pogba, who would likely have started for France in Saturday's home game against Kazakhstan.

The French lead their qualifying group by three points and need one win from their final two games to seal first place and advance automatically to next year's tournament in Qatar.

France plays Finland, which is four points behind in third place, on Tuesday.

Pogba has been serving a domestic suspension for United after getting sent off against Liverpool last month after coming on as a substitute, meaning he has missed the team's last two Premier League games.

Lionel Messi arrived in Argentina on Monday to attend the double round of South American World Cup Qualifiers this month.

He landed in a private jet together with his Paris Saint-Germain teammates Angel di Maria and Leandro Paredes.

It's unclear whether Messi will be fit to play against Uruguay away in Montevideo and host Brazil in San Juan.

He missed the game for PSG this weekend against Bordeaux, as he nurses minor knee and hamstring injuries.

Argentina is currently second in the standings with 25 points, six behind Brazil and eight ahead of third place Ecuador.

The first four automatically qualify to the World Cup in Qatar, while the fifth place plays an intercontinental playoff.