'I am not a racist': Quinton de Kock apologises for not taking the knee

'I didn't understand why I had to prove it with a gesture,' he said 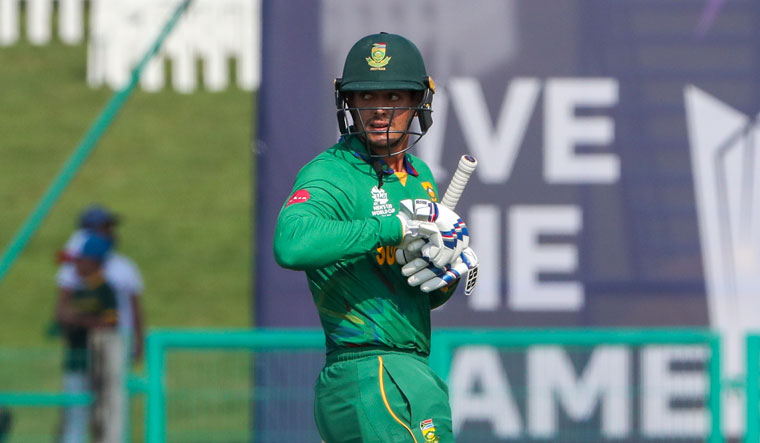 South Africa's wicketkeeper-batsman Quinton de Kock has apologised for refusing to play the T20 World Cup match against West Indies as a protest to the team management's directive to 'take the knee' on the field before the match.

De Kock shared a lengthy statement on his Instagram page apologising to fans and teammates for making an issue out of it.

“If me taking the knee helps educate others, and makes the lives of others better, I am more than happy to do so,” he said.

'Taking the knee' is a voluntary global gesture against racism adopted by sportspersons across the world.

Ahead of the West Indies match on Tuesday, South African cricketers were directed by their board to take the knee in their remaining matches of the T20 World Cup to ensure a "consistent stand against racism given the country's history".

But de Kock, who was seen standing while his teammates took the knee in the previous match against Australia, withdrew from the game. He clarified his decision in his Instagram post.

“I felt like my rights were taken away when I was told what we had to do in the way that we were told.... I didn't understand why I had to prove it with a gesture when I live and learn and love people from all walks of life every day.

“I was shocked that we were told on the way to an important match that there was an instruction that we had to follow, with a perceived “or else”.”

He apologised profusely to those who were hurt by his decision to skip the game and said that he meant no disrespect to the West Indies players.

“I am deeply sorry for all the hurt, confusion and anger that I have caused.... I come from a mixed race family.... For me, black lives have mattered since I was born.

De Kock said he had an “emotional conversation” with the cricket board on Wednesday night and now has “better understanding of their intentions”.

After the game, South Africa captain Temba Bavuma said he was “surprised and taken aback” by de Kock's refusal to take the knee.

In his statement, De Kock thanked his teammates and captain for the support.

"I just want to thank my teammates for their support, especially my captain, Temba [Bavuma]. People might not recognise, but he is a flipping amazing leader.

If he and the team, and South Africa, will have me, I would love nothing more than to play cricket for my country again.”