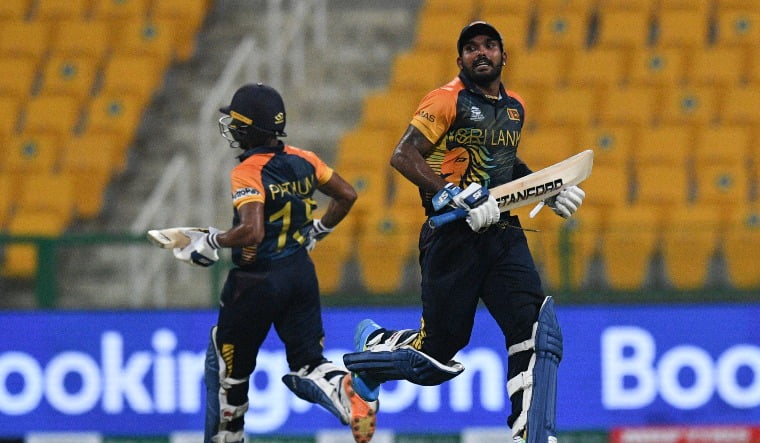 Wanindu Hasaranga's rearguard 71 was beautifully complemented by a clinical bowling display as Sri Lanka sealed their place in Super 12s with a massive 70-run win over Ireland in a group A first-round match of the ICC T20 World Cup on Wednesday.

Asked to bat first, Sri Lanka recovered from 8 for 3 to make 171 for 7 in 20 overs and then returned to dismiss Ireland for 101 in 18.3 overs to grab the top position in Group A with four points from two matches.

Ireland, on the other hand, will now have to beat Namibia in their final group match to make it to the next stage. Namibia had stunned the Netherlands by six wickets earlier in the day.

Hasaranga did the star turn for Sri Lanka as he shared a 123-run partnership with opener Pathum Nissanka (61) to lift the former champions to a competitive total of 171 for 7.

Defending the total, the Lankan spinners were at the forefront as the Ireland batters appeared to be all at sea against Maheesh Theekshana (3 for 17) and Hasaranga (1/12) and could never score freely.

The pace trio of Lahiru Kumara (2/22), Chamika Karunaratne (2/27) and Dushmanta Chameera (1/16) also made things tough for the Ireland batters.

Skipper Andrew Balbirnie (41) fought a lonely battle for Ireland as the other batters failed to cope with the formidable Lankan attack.

Chasing 172 for victory, Ireland did not get the desired start, losing wickets quickly in the powerplay.

The big-hitting Kevin O'Brien (5) perished in the opening over, top-edging one from Chamika Karunaratne to Theekshana.

The stocky Paul Stirling (7) smacked a boundary before sweeping off-spinner Theekshana straight into the hands of Lahiru Kumara.

Hasaranga then struck with his second ball as his googly crashed the stumps of Gareth Delany (2) to leave Ireland at 32 for 3.

Balbirnie and Curtis Campher (24) led a fightback with a 53-run fourth-wicket partnership before Theekshana broke the stand to end all hopes for Ireland.

Earlier, opting to bowl, left-arm medium-pacer Josh Little (4/23) picked up two wickets at the start to leave Sri Lanka tottering at 8 for 3 but Hasaranga (71) came up with a classy knock under pressure to rescue the former champions.

He smashed his way to a 50 from 38 balls, striking seven fours and one six to put the innings back on track.

From overs seven to 15, the duo smashed over 80 runs before Hasaranga fell while attempting to force the pace.

Invited to bat, Sri Lanka suffered an early blow when the aggressive Kusal Perera (0) spooned a catch to the cover fielder off the first ball he faced from Paul Stirling.

The experienced Dinesh Chandimal (6), who failed in the first match against Namibia, could not get going yet again, dragging one from Little on to his stumps to leave Lanka at 8 for 2.

It became 8 for 3 when Avishka Fernando fell for a first-ball duck to a superb delivery from Little.

Hasaranga, who walked in at the fall of Fernando, took the attack to the Irish bowlers and smashed four consecutive boundaries off the first over bowled by Simi Singh to put the Lankan innings back on track.

Nissanka also complemented his partner, smashing six boundaries and a six in his 47-ball innings.

Later, skipper Dasun Shanaka slammed two fours and a six in his 11-ball 21 to beef up the total.