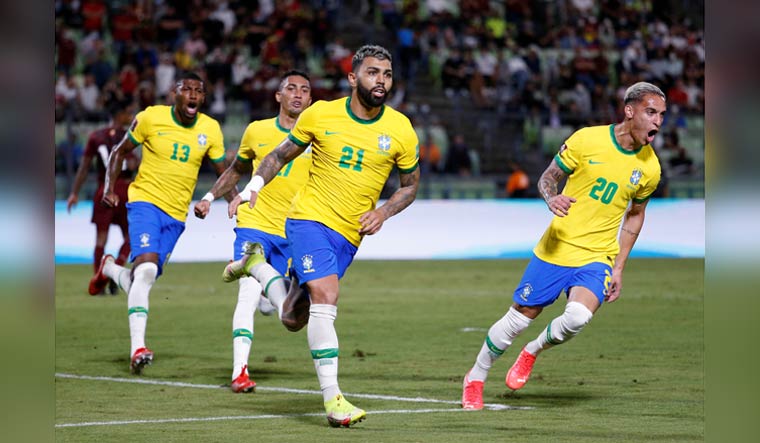 Leaders Brazil and second-place Argentina had uninspiring performances in their World Cup qualifying matches, but gained key competition points as they try to secure their direct spots for Qatar next year.

Playing without suspended Neymar and injured Casemiro, Brazil won 3-1 at Venezuela, and Argentina had a goalless draw at Paraguay.

Brazil trailed bottom-of-the-table Venezuela until the 71st minute, when Marquinhos levelled the match in Caracas. Gabriel Barbosa scored the second goal from the spot in the 85th minute and substitute Antony scored the third from close range in added time.

Lionel Messi was not enough for Argentina to break Paraguay's powerful defensive line. The two goalkeepers, Argentina's Emiliano Martinez and Paraguay's Antony Silva, were the best on the pitch.

Brazil leads with 27 points and Argentina has 19 in nine matches. Their clash in September was suspended after seven minutes when players were found to have broken COVID-19 protocols.

Ecuador and Uruguay have 16 points after 10 matches, but the Ecuadorians have more wins and hold third place after a 3-0 win against Bolivia. All goals in the match came between the 14th and the 19th minutes; the first with Michael Estrada and then two by Enner Valencia.

Hours earlier the Uruguayans had been held to a 0-0 draw at home with Colombia, which is in fifth place in the 10-team round-robin competition with 14 points.

The top four teams secure a spot at next year's World Cup in Qatar. The fifth-place team will enter a playoff against a team from another confederation.

Brazil coach Tite picked a starting lineup with many new players he wanted to test. But left-back Guilherme Arana and midfielders Fabinho and Gerson were below par for most of the match.

Venezuela's goal came in the 11th minute, when Yeferson Soteldo crossed from the right towards Eric Ramirez. Two Brazilian defenders, Fabinho and Marquinhos, slipped at the same time and gave the Venezuelan a clear chance to head the ball to the right of goalkeeper Alisson.

Brazil struggled in creation until the break, but things improved after Everton Ribeiro left for Raphinha. The winger was key for the Seleo to become more dynamic in the second half.

Raphinha took the corner kick that landed on Marquinhos' head to level the scoring in the 71st minute. He then started the play that ended in Barborsa being fouled in the penalty box. And then he gave the low cross that allowed Antony to score near the final whistle.

"We started in much worse shape than we could," Marquinhos said. But as we can see, set pieces can make all the difference in a match, and it did today."

Brazil's next match will be at Colombia. Venezuela will face Ecuador.

Argentina had three opportunities in the first 12 minutes of the encounter in Asuncion, which indicated a win was on the way for the Copa America champions. But Paraguay's Silva made key saves to keep his team in contention.

The second half was very different, with both teams creating chances. Argentina had the best one from a long-distance shot by Papu Gomez, but it was stopped by Silva.

It was the 11th draw between the teams in South American World Cup qualifying history.

"We failed to score, especially in opportunities that were very clear," Argentina coach Lionel Scaloni said at a news conference. "What matters is that the team never relaxed and kept trying."

Argentina will face rival Uruguay on Sunday. Paraguay, with 12 points and so far out of qualifying spots for the World Cup in sixth place, will face Chile on Sunday.

Also on Thursday, Peru beat Chile 2-0 to keep alive its hopes of returning to the World Cup. Christian Cueva in the 35th minute and Sergio Pea in the 64th scored for the winners. Peru is in seventh place with 11 points, four behind fifth-place Colombia.

Peru will face Bolivia on Sunday.