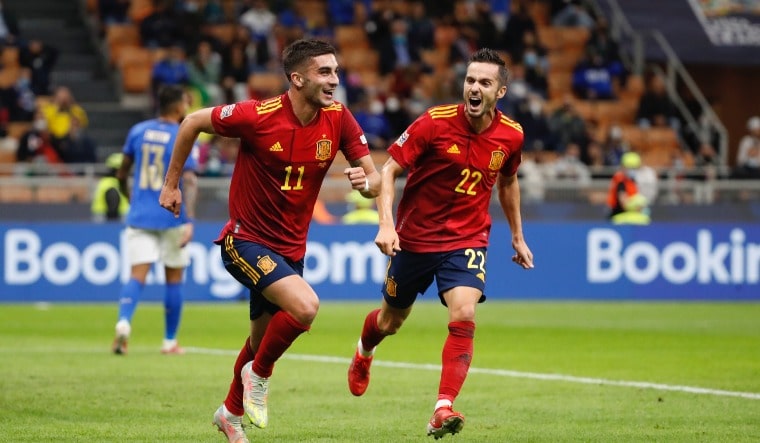 A young Spanish side upset European champions Italy 2-1 in the semifinals of the UEFA Nations League, thanks to two goals by Ferran Torres in the first half.

Italy captain Leonardo Bonucci was given his marching orders, three minutes from half time, after picking up a yellow card. Lorenzo Pellegrini came off the bench to score for Italy, but it would not be enough after a scintillating first half by the Spaniards.

The win takes Luis Enrique’s side to the final, which will be played Sunday night. But more importantly, it ends Italy’s world-record unbeaten run.

The Azzurri had gone 37 games without defeat that resulted in them winning the UEFA Euro 2020 in July. But on this night in Milan, Roberto Mancini’s side were thoroughly outplayed by the Spaniards.

Both of Torres’s goals came off brilliant passages of play by his teammates that ended with crosses from Mikel Oyarzabal on the left.

The first was a volley off his shin from a looping ball in the 17th minute, while the second was a typical striker’s header, finding the far corner past a rooted Gigi Donnarumma.

Sadly for the young Italian keeper, he was constantly booed by the Milan crowd as he played his first game in front of them since his move from AC Milan to Paris St Germain.

After the game, Mancini criticised the locals for this gesture, saying they should be prioritising their love for Italy above their club.

When the last time these two teams met, it was in the semifinals of the Euro 2020, and Spain had lost on penalties.

For Spain, it was a memorable evening particularly for 17-year-old midfielder Gavi. The Barcelona player became the country’s youngest-ever debutant and impressed alongside the experienced Sergio Busquets and Koke.

Another young midfielder who came on and shone for the team was 19-year-old Yeremi Pino, who plays for Villareal.

In the final, Spain will face Belgium or France, who will play the second semifinal tonight.