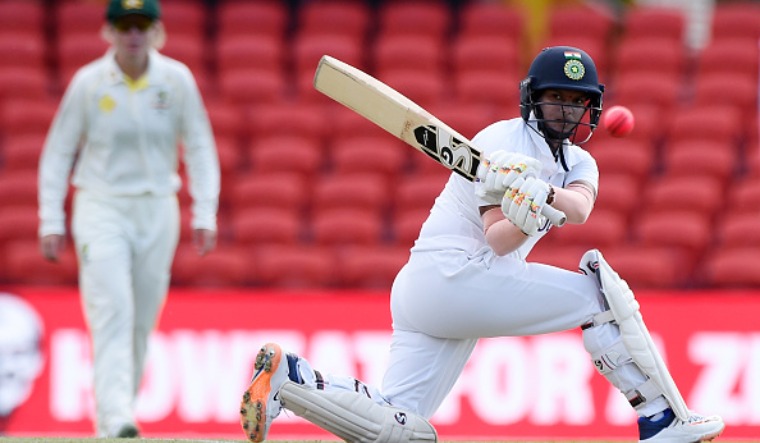 India dug in deep, instead of going for quick runs, to reach 359 for seven at dinner on the third day of the rain-marred day/night women's Test against Australia here on Saturday.

Resuming at their overnight score of 276 for five after rain and lightning had brought a premature end to the second day's play at the Carrara Oval, the Indians scored 83 runs for the loss of Taniya Bhatia and Pooja Vastrakar's wickets in the long first session.

At the dinner break, Deepti Sharma was batting on 58.

Taniya's dismissal brought to an end a 45-run stand for the sixth wicket with Sharma that came at a much slower pace than Thursday as the two teams seemed like they would be content with a draw rather than forcing a result after a significant part of the match was wiped out by inclement weather.

The duo of Taniya and Sharma consumed more than 28 overs to get those 45 runs.

It was Stella Campbell, who dismissed Taniya, caught behind by Alyssa Healy off a back-of-a-length delivery on off stump that moved away, for her first Test wicket.

While they did not lose many wickets, what did not help India''s cause was that the batters could not capitalise on the loose balls on a pitch that looked pretty flat.

Meanwhile, Sharma, who started the day on 12, got to her second Test fifty with a sweep behind square, reaching the landmark in 148 balls with the help of five boundaries.

Ellyse Perry gave the team another breakthrough when she had Pooja Vastrakar brilliantly caught by Beth Mooney at gully as the batter looked to drive through covers.

This was Perry's 300th international wicket, even as Sharma went past her previous best Test score of 54.