Gurjar, Yogesh Kathunia and Sumit Antil were felicitated by their corporate sponsor 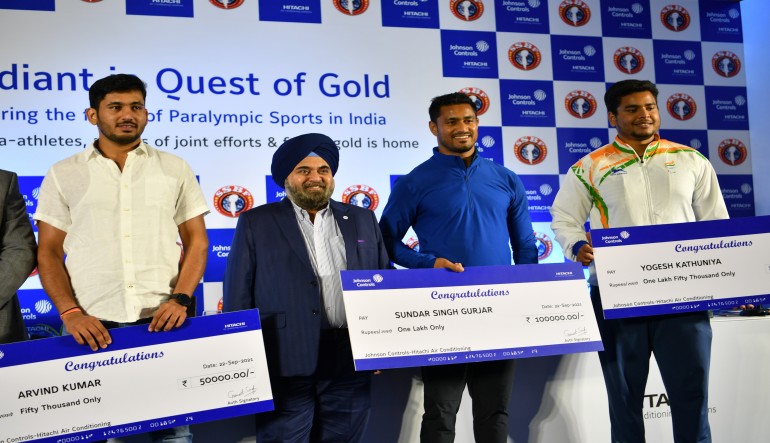 Paralympic javelin thrower Sundar Singh Gurjar has seen massive lows and highs in the past six years. In 2015, he met with an accident while fixing a tin shade at his friend's house, resulting in his left wrist being amputated. Before the mishap, he was an athlete who had a dream of representing India in the general category. He overcame the trauma of the accident and resumed training, this time in the F-46 javelin throw category. A year later, he was set to compete at the Rio 2016 Paralympic Games when a mistake in a roll call led to his disqualification. He went into depression, but his coach Mahavir Saini never gave on him. Saini pulled Gurjar out of his dark thoughts and got him to train and prepare for Tokyo Paralympic Games 2020. Today, Gurjar sports a big smile, having won the bronze in Tokyo with a throw of 64.01m.

He has indeed buried the ghost of the past and is happy with his medal from Tokyo. Added to this joy is the fact that his name, alongside that of shooter Manish Narwal, high jumper Sharad Kumar, and shuttler Pramod Bhagat, has been recommended for Major Dhyan Chand Khel Ratna Award 2021 by the Paralympic Committee of India.

"For me, what happened in 2016 is in the past. I am happy I could win this medal in Tokyo, but my work is not over. I will now aim for the gold in Paris 2024," said Gujjar who hails from Karauli in Rajasthan. Gurjar said he felt that the monkey of participating in a Paralympic Games and winning a medal was finally off his back, and now working towards a gold for the next edition would be easier.

Gurjar, silver medallist in discus throw Yogesh Kathunia and Tokyo gold medal winner in javelin throw Sumit Antil were felicitated by their corporate sponsor Johnson Controls-Hitachi Air Conditioning India Ltd in a lavish ceremony in the capital on Wednesday. The company has been supporting 10 para-athletes, out of which the trio won medals at the Paralympic Games recently under its ‘Radiant in Quest of Gold’ campaign. The company is buoyed by the reception and attention given to the para-athletes during these games that it has decided to extend more support to para-athletes as part of its CSR initiative.
Kathunia is looking forward to resuming his training once again, with the celebrations at home and multiple felicitations having subsided a bit. Asked whether he thought para-athletes weren’t getting as much attention as the Olympic medalists, Kathunia, ever ready with a wide grin and sunny disposition, said, "This time we too have got good support. As long as people and media keep giving the same support, it will be a huge thing for us."

Satyanarayana, coach of the Indian para-athletics team too was present at the felicitation. Having seen his athletes come up with a stellar performance at the Paralympic Games, he urged all his athletes to follow the example of Tokyo 2020 Olympic gold medalist Neeraj Copra to further excel in their sports.

"Look at Neeraj Chopra. He was not number one in the world but he has the discipline to work hard. This is why he could win a gold at Olympics. His discipline has helped him to excel in his sport."

Meanwhile, it was announced that the para-athletes would also be making a guest appearance in a feature film produced by Shirdi Sai Baba fame actor Aushim Khetarpal, Chal Jeet Le Ye Jahan. It is a feature film on para cricketers who won the Physical Disability World Cricket Series 2019 in England.