AC Milan hold Juventus, who are yet to register a win this season 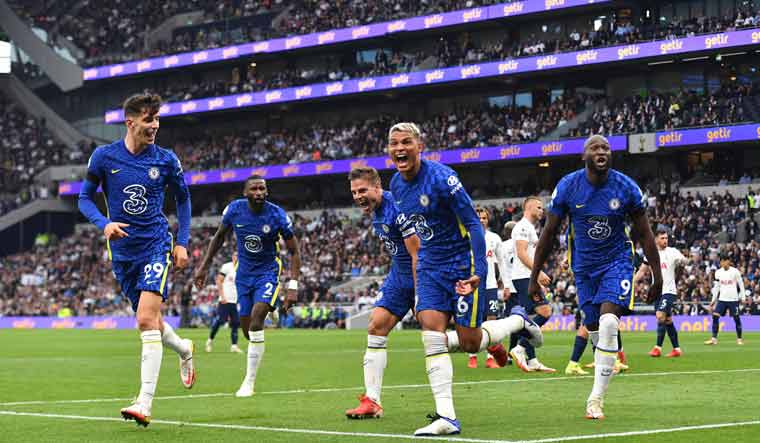 Chelsea beat Tottenham Hotspur 3-0 on Sunday to go joint top of the English Premier League table at the end of the fifth matchday. Goals by Thiago Silva, N’Golo Kante and Antonio Rudiger completed a dominant performance by Thomas Tuchel’s men over their London rivals.

Despite the return of Heung-Min Son, the Spurs attack looked toothless against Chelsea’s solid defence. Tottenham had gotten off to a flying start this season with three wins under new manager Nuno Espirito Santo, but have now gone three games without a win, including a draw in the newly formed Europa Conference League.

With this win, Chelsea have now won three consecutive fixtures against Spurs for the first time since 2005.

The result meant that Chelsea and Liverpool now have identical results at the top of the table. Liverpool had beaten Crystal Palace at Anfield the day before, with Sadio Mane, Mohamed Salah and Naby Keita all getting on the scoresheet.

Just before Sunday’s London derby, Manchester United edged out West Ham in a thriller. After Cristiano Ronaldo equalised in the first half, former Hammer Jesse Lingard scored in the 89th minute to take United ahead. However, the side conceded a penalty in the last play of the controversy-riddled game. West Ham's Mark Noble came off the bench to take the spot-kick, which was eventually saved by United’s hero of the day, David de Gea.

Like Liverpool and Chelsea, United also have 13 points from five games, but with an inferior goal difference.

The surprise of the week in the Premier League came on Saturday when Southampton held champions Manchester City to a goalless draw at the Etihad Stadium. Two days earlier, City coach Pep Guardiola had criticised fans for the lack of home support and implored them to turn up in numbers at the home ground. The fans turned up but it looked like his players did not.

In his third appearance for PSG, Lionel Messi hit the woodwork once and contributed little else to his team’s 2-1 win over rivals Lyon. The Argentine made his first start in front of the Paris home crowd, but was removed in the 76th minute. Manager Mauricio Pochettino’s decision left the player surprised.

“We made the decision to take Messi off because of a possible future injury,” Pochettino said later. “We have important matches coming up and we have to protect him.”

Neymar’s second half penalty had brought parity to the game after Lyon’s Lucas Paqueta opened the scoring for Lyon. Eventually, it was Argentine striker Mauro Icardi who scored the winner off a Kylian Mbappe cross deep into stoppage time.

In the Italian Serie A, table leaders AC Milan held underperforming Juventus to a 1-1 draw at the Allianz Stadium. Alvaro Morata charged at goal and dinked the ball over the Milan keeper and into the empty net in just the fourth minute of the game, but Ante Rebic’s towering header in the last quarter of an hour ended Juventus’ hopes of a first win of the season.

The highly anticipated return of manager Massimiliano Allegri to Turin has not reaped the desired results so far. Four games into the season, Juventus are languishing in the relegation zone, having picked up just two points.

Elsewhere, defending champions Inter Milan crushed Bologna 6-1 to share the top spot with AC Milan. Despite losing their best player, Romelu Lukaku, and title-winning manager, Antonio Conte, the Nerazzurri are looking dominant in the domestic league. The side shrugged off the loss to Real Madrid in the midweek Champions League fixture with five players getting on the scoresheet against Bologna. Edin Dzeko scored two.

Jose Mourinho suffered his first defeat as an AS Roma coach in a 2-3 loss to Verona. It was another thrilling fixture for Roma fans after the narrow 2-1 victory over Sassuolo, which was the Portuguese manager’s 1000th professional game.

In Spain, Real Madrid beat Valencia 2-1 to continue their unbeaten start under Carlo Ancelloti. Karim Benzema and Vinicius Jr scored within three minutes of each other in the second half to pull ahead, despite Valencia dominating most of the game.

And in Germany, it was business as usual for serial title winners Bayern Munich, who beat Bochum 7-0. For Borussia Dortmund, Norwegian wonder boy Erling Haaland continues his goal-scoring spree with a brace in a 4-2 win over Union Berlin. Dortmund are one point behind table-toppers Bayern.