As many as 1,300 souvenirs received by PM Modi are being auctioned online 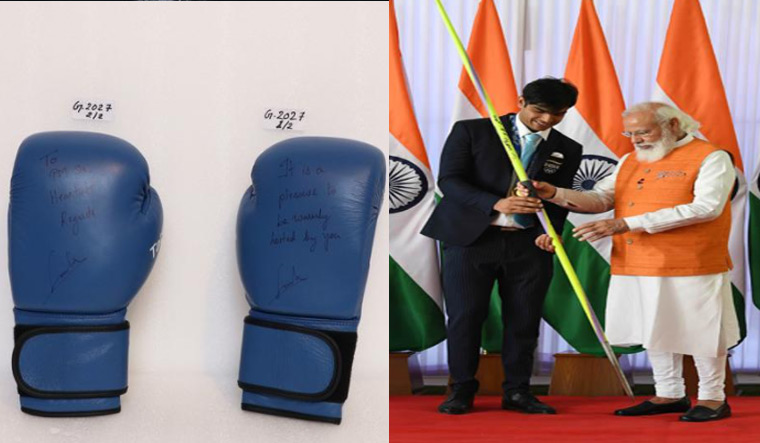 Neeraj Chopra's javelin, Lovlina Borgohain's boxing gloves, P.V. Sindhu's badminton kit and a women's hockey stick are among the most-sought items in an ongoing e-auction conducted by the ministry of culture. The auction of a large collection of mementos received by Prime Minister Narendra Modi had opened on September 17, his birthday.

Several Olympic stars who made history at the Tokyo Games had gifted their equipment to the prime minister. Bids for Chopra's javelin and Borgohain's gloves have already touched Rs 10 crore each, with 19 days still to go for the auction to end.

The ministry announced that the proceeds of the auction would go to Namami Gange, the Centre's project to clean and rejuvenate the river Ganga.

The gold-medal winning javelin, signed by Chopra, had the highest starting price of Rs 1 crore. Paralympic javelin gold medallist Sumit Antil's javelin was also given a base price of Rs 1 crore and is currently going for Rs 3.5 crore, as per the official auction website.

Borgohain's blue gloves, which she used to win the bronze medal in Tokyo, had a base price of Rs 80 lakh, as did Sindhu's autographed racket and bag.

There are as many as 1,300 items going under the hammer in this block. Apart from sports equipment, other mementos being auctioned include a replica of the Ram temple presented by UP Chief Minister Yogi Adityanath, models of historic buildings, famous paintings and souvenirs from foreign dignitaries received by the prime minister.

Hours within the auction going live, fencer Bhavani Devi's sabre and Paralympic shuttler Suhas Yathiraj's racquet had surprisingly attracted bids up to Rs10 crore before Chopra's javelin had even crossed the Rs 1.5 crore mark. But as it turned out, the bids were part of a prank and the culture ministry quickly removed them.

The auction is conducted on pmmemtos.gov.in. On October 7, the ministry will notify the winning bidders via email.