Jhingan credited the ISL for helping him grow as a footballer 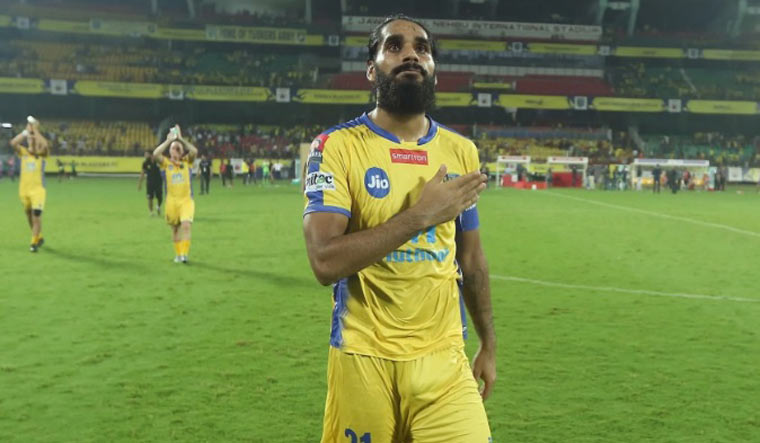 Trusted for his leadership qualities by his new club HNK Sibenik, Indian centre-back Sandesh Jhingan feels he would be "tested to the limit" while enhancing his game outside his comfort zone at Croatian league Prva HNL.

Jhingan will become the first India international footballer to play in the Croatian top-tier league after completing a move from ATK Mohun Bagan to HNK Sibenik.

"This will enhance my game. This is where I would be tested to my limit. Challenges wise, if I can put in the work, if I stay disciplined enough then I can see if I can get into the starting XI.

"It's quite challenging but I trust myself, my work ethic, it's always on me whether I will play or not," Jhingan said during a virtual interaction on Thursday.

The top central defender added, "I think I am at a stage of my career where I really want to test myself in the highest-level possible and I think this is the perfect platform for me. It has been my personal desire to play in Europe and I have taken up this challenge upon myself."

Named India's footballer of the year last month, the 28-year-old is already in Croatia and watched Sunday's home win against Hrvatski Dragovoljac in the country of the 2018 World Cup finalists.

Asked if big moves such as these are going to help the Indian senior team, he responded in the positive.

Jhingan started his youth career at St. Stephen's Football Academy in Chandigarh and got a break in the top division with United Sikkim in 2011.

As a young 21-year-old, Jhingan first broke into prominence during the inaugural edition of the Indian Super League (ISL) when he was adjudged the Emerging Player of the League in 2014.

A feat that helped him earn a place in the senior India national team making his debut in 2015 against Nepal at the FIFA World Cup 2018 qualifiers.

"If you have monitored my career, I have always preferred to take to take decisions outside my comfort zone. I wanted to go somewhere... I always have this thing in my mind that sky is the limit.

"I dreamt big, worked hard for it, remained disciplined and made sacrifices to achieve my full potential.

"I never went after money, I always chose glory over money. That's how I take my decisions... I would sleep with a clear conscience. Yes, it's the right decision."

The defender has two ISL runners-up medals with Kerala Blasters FC where he spent six years and moved to ATK Mohun Bagan in 2020 after missing the previous season due to injury.

He thanked his previous club ATK Mohun Bagan for him backing when he was down with an injury, even as some gave up on on the player.

"The move from ATK Mohun bagan to Sibilik was difficult because I have a lot of respect for their (ATK Mohun Bagan) management and owners.

"Every Asian has a desire to move to Europe, so I had to take this decision. I am at the right age now to take a new challenge in my career."

Praising the ISL for helping him grow as a footballer, he said, "The more I say how it has benefited me, the less it is. ISL has been a blessing for me and a lot of Indian players will agree with me. It has given us a lot of exposure."

The Croatian club is owned by a Colombian company and its director Eduardo Zapata is delighted to have Jhingan on board, from footballing point of view as well as its aim to promote multi-culturalism.

"We are thrilled about Sandesh coming here. I am Colombian owner in Croatian football. We are very open to everything as we aim to become a big international club. This is a great step in that direction.

"I don't care if he is from India or Argentina. Sandesh is a good player and we all agree on it. The decision is made by the coach and we move forward."

Founded on December 1, 1932, HNK Sibenik returned to the premier division last season under a new management. The club finished sixth in the league, just two positions below qualification to European competitions.

Zapata added, "We needed someone good in this position and he is a great player with leadership qualities since he is experienced.

"This is a win-win situation. He is a mature person, we are very impressed with his personality, he is very happy here.

"We need a specific kind of a stopper and our agency in Madrid offer us players, we also have our coach who used to play in Barcelona and he has an idea about Indian football and also your national team coach (Igor Stimac)."

Asked about his expectations from his new recruit, he said, "He should be a good leader inside and outside the pitch. He is a role model, very disciplined and he will help us beyond football."

The club is located in Sibenik, the Dalmatian region of Croatia, a city with breath-taking fortresses protecting it for centuries and a beautiful Cathedral of St. James, included on the UNESCO World Heritage List.

"It's a beautiful city with population of 40,000. Life is good, people are very humble here. The training pitches are nice, we have got three grounds.. The youth setup is also very impressive," Jhingan said.