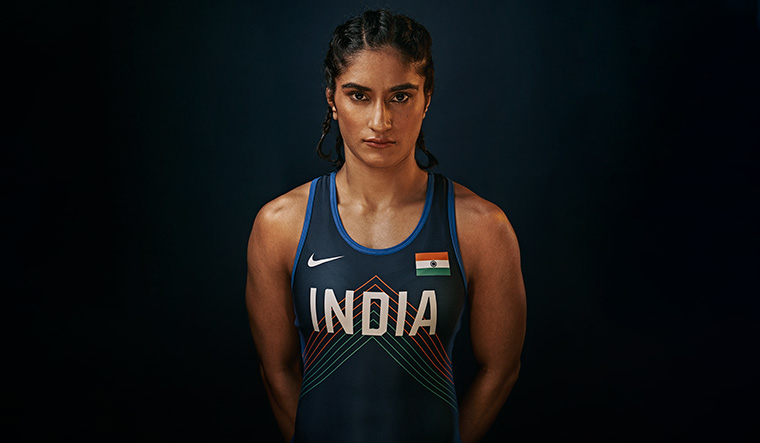 Vinesh Phogat suffered a massive upset defeat at the Olympic Games after being pinned by Belarus' Vanesa Kaladzinskaya in the 53kg quarterfinals to not only go out of the gold medal race but also face the risk of getting eliminated, in Chiba on Thursday.

Vinesh had no answer to the supreme defence of Vanesa, who got her revenge from the Indian at the biggest stage after suffering a similar embarrassing defeat ''by fall'' earlier this year in Ukraine.

Vanesa, the reigning European champion, executed her strategy perfectly as Vinesh could not find a way to wriggle out of Vanesa's headlocks.

That crippled and rattled the top seed Vinesh, who is one of the strongest wrestlers in her category.

Even when Vinesh got behind Vansea, she could not push her down on the knees from a favourable position with the Belarusian showing immense strength to keep her legs straight.

Vinesh used all her might but Vanesa's defence would not crumble. Even the famous double-leg attack that Vinesh has used to get herself into position to pin her rivals, did not result in points.

Now if the Belarusian does not make the final, Vinesh's Olympic campaign will end in another heart-breaking exit.

She had suffered a quarterfinal defeat against China's Sun in Rio Games, where she also endured a leg injury and was stretchered out of the mat.

Before this bout, Vinesh had knocked out Rio Olympics bronze-winner and six-time world medallist Sofia Mattsson with a commanding 7-1 win.

Vinesh had beaten the Swede at the 2019 World Championship as well.

Showing her immense power, Vinesh turned the Swede from a difficult position on the edge of the mat when she could have conceded a point.

The Indian maintained the intensity throughout and even got herself into a position for a pin but the Swede escaped the embarrassment.

Young Anshu Malik bowed out of the 57kg competition after losing her repechage round 1-5 to Russia''s Valeria Koblova, the Rio Olympics silver medallist.

Anshu never looked intimidated by a stronger opponent and was leading the bout at one stage on criteria but towards the end, the Russian pulled off a two-pointer to nose ahead.

The 19-year-old Indian had lost her opener to European champion Irina Kurachikina but after the Belarusian progressed to the final, she bounced back to be in contention.

Ravi Dahiya (57kg) and Deepak Punia (86kg) will fight for gold and bronze medal respectively, in the evening session.