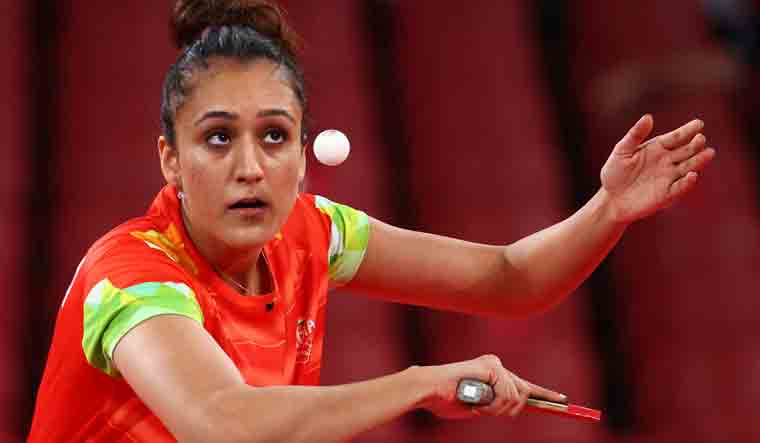 India's table tennis star Manika Batra on Saturday refused to take advice of national coach Soumyadeep Roy during her first round match at the Tokyo Olympics after her personal coach was not granted on-court access.

World number 62 Manika won the match against 94th-ranked Tin-Tin Ho of Britain 4-0 but no one was sitting in the coach's corner and that attracted a lot of attention on social media.

Manika's personal coach Sanmay Paranjape was controversially cleared to travel with her to Tokyo but is not allowed to stay at the Games Village with the national team. He is staying in a hotel and is allowed access only for training sessions.

The 26-year-old had wanted Paranajpe's accreditation to be upgraded so that he could be court-side during her matches but team leader MP Singh, who is also a TTFI advisor and is in Tokyo, said Manika's request for field-of-play access to her coach was denied by the organisers.

"After her request for on court access for her personal coach was denied, she refused to be coached by our national coach. I had to intervene in the matter but she also refused me to take Roy's advice during the match," Singh said. However, Roy was seen court-side when Sharath Kamal and Manika played their round of 16 match in mixed doubles. Roy is a member of the gold winning men's team at the 2006 Commonwealth Games and has been a longtime teammate to India's table tennis great Sharath.

With the Games happening in COVID-times, there were more restrictions on the number of support staff allowed with the team than usual. Paranjape, who is based in Pune, was cleared to travel to Tokyo but G Sathiyan's coach S Raman, who is an Olympian, was not.