Euro 2020 in stats: Records, own-goals, lucky dates and the emergence of Pedri 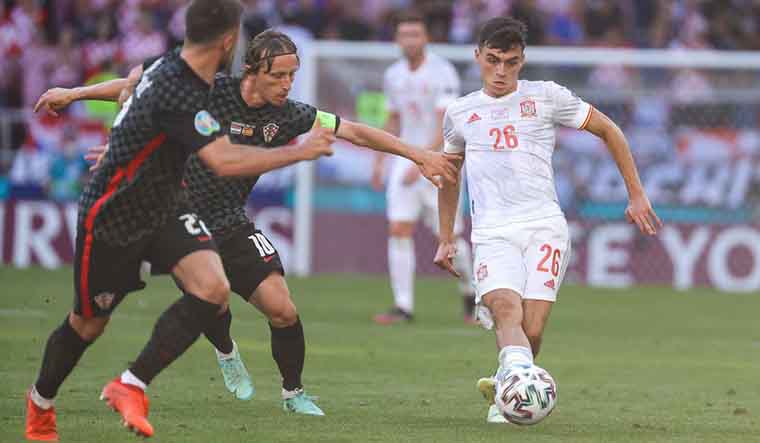 Ahead of Euro 2020, UEFA had published the predictions of its five-member expert panel. David James, 2004 quarterfinalist with England, said: "Whether I believe it or not, I always go for England." That was more cautious optimism than sound analysis, but it so nearly worked out for him with England finishing as runners-up to Italy. The other panelists were not as partisan with their predictions.

Gazika Mendieta, 2000 quarterfinalist with Spain said, "I would love it to be Spain, but going into the tournament France are favourites. They are the reigning world champions, they have the same core as 2018 and have added Karim Benzema, making a sensational squad even stronger." Gianluca Zambrotta, 2000 finalist with Italy, too, said France have a sensational team, while expressing his hope that Italy would win (if only he had been more James-esque in his prediction, he could have bragged about being right).

Nuno Gomes, 2004 finalist with Portugal, backed his country, but added that the team was in a "group of favourites with France and Germany". German Steffen Freund, the sole Euros winner (1996) on the panel, picked France. "They have the best squad by far and the individual qualities that can be decisive. There is a back-up for every top player... this is a very important factor after such a long season."

In short, for all the panelists who made an attempt to be objective, France were the favourites or at least one of the favourites. Therefore, when France faced Switzerland in the round of 16, it is unlikely that anyone gave the Swiss a chance. After Haris Seferovic put Switzerland ahead in the 15th minute with the 800th goal in Euros history, the French responded with a dominant display to take a 3-1 lead.

But, Switzerland pulled off a stunning comeback to level the match 3-3 and then knock out the world champions in a penalty shootout. It ended an 83-year wait, since the 1938 World Cup, for a positive result in the knockout phase of a tournament. Moreover, heading into this tournament, the Swiss had never scored three goals in a Euros finals game. They did it twice at Euro 2020 (France and, earlier, Turkey).

It was not just Switzerland that stepped up finishing in the tournament. Overall, there were 142 goals in the 51 games, the highest ever at the Euros. The average of 2.78 goals per game is also a record since the finals started having more than four teams in 1980. The top scoring team was Spain with 13 goals in six matches (Italy scored 13 goals in seven matches). It was also a new record for Spain at the Euros. They had scored 12 each in 2008 and 2012—they had won both times.

Just two behind Spain and Italy's tally was own-goals. According to UEFA, there have been only 20 own-goals in Euros; 11 of them came this time. One possible reason for this is the COVID-induced fixture congestion of 2020-2021. Exhaustion could have resulted in the inability to get into better positions to clear the ball, like Denmark captain Simon Kjaer's own-goal in the semifinal. Although, other own-goals, like when Spanish goalkeeper Unai Simon let the ball go under his feet, were results of lapses in concentration.

Top scorer Cristiano Ronaldo became the first player to appear, and score, in five back-to-back tournaments and also became the all-time top scorer at the Euros, ending on 14 goals. His team, Portugal, maintained the record of ﻿having always progressed from its group (eight times). The 2-2 draw against France, which ensured Portugal's progress, was the first time the Les Blues had failed to win a match in which Benzema scored (22 previous wins).

England's win against Germany was the team's first Euros knockout stage success without a penalty shootout since 1968. England also became the first team to top a group with just two goals. Neither they nor Italy conceded in the group stage. Scotland got their solitary point by holding England to a 0-0 draw on June 18 (European time); of the eight points the Scots have earned at the Euros, seven came on June 18.

Denmark, which saw its dream run ended by England in the semifinals, became the first team to reach the semifinals after losing the first two group games. Also, when Denmark beat Wales on June 26, it was their first win in the knockout phase since beating Germany in the final of Euro 1992, also on June 26. It was Denmark's first semifinal appearance since 1992 and this 29-year gap is the longest in Euros history.

Italy's second Euros win meant that the 53-year gap between their first and second title wins is the longest in the tournament's history. Giorgio Chiellini, 36 years and 331 days, became the oldest captain to win the Euros. Italy also set new national records of 13 consecutive wins and 32 games unbeaten. After the final, they stand at 34 games without defeat. When Federico Chiesa scored in the round of 16, he and his father, Enrico, became the first father-son duo to score at the Euros.

One for the future

"I haven't seen a player so young, so strong with personality, without fear," said Fabio Capello, the leader of UEFA's technical observers, on Spain's Pedro Gonzalez Lopez aka Pedri. "He is fantastic. I saw Messi when he was 17 and thought, 'This is a player who will be a genius'. As a midfielder Pedri for me is something completely different to the other players."