History shattered, history made: With Copa America, Messi finally exorcises ghosts of his past

Messi has lifted his first major trophy with his country 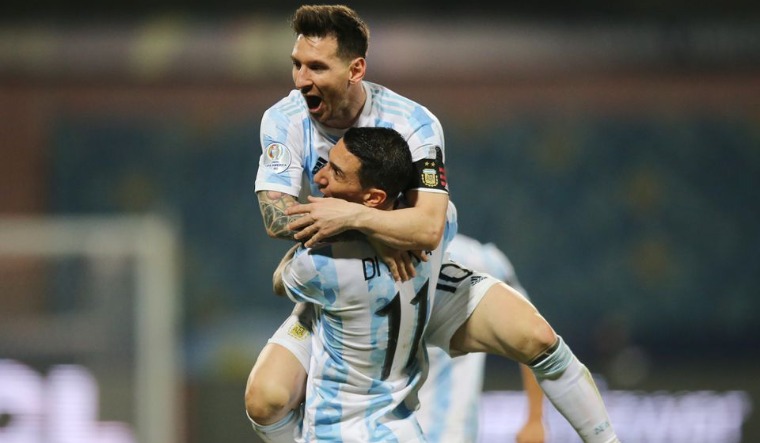 Looking at history, it looked like a game stacked against Argentina's favour. Going by statistics alone, Brazil would be the clear favourites in the Copa America final, which had a dream match-up with Argentina. Argentina hadn't won any major trophy in the last 28 years, and had outwitted Brazil in just one out of the four deciders since 1937. If Brazil lost this game, it would be their first loss on home soil since a defeat to Paraguay in 1949. A loss for Brazil would be their first competitive defeat since they lost to Belgium in the quarter-finals of the 2018 World Cup.

But the game had all the makings of one that could shake history upside down. Especially with Argentinian talisman Lionel Messi waiting down the wings for what would be his first major trophy with the national team. And a historic upset is exactly what happened at the Maracana stadium in Rio, as Argentina beat Brazil 1-0. This was Argentina's 15th Copa America triumph, drawing level with Uruguay as the all-time leading winners. Winger Angel Di Maria scored for Argentina in the 22nd minute, off a beautiful long pass by Rodrigo De Paul, which was badly misread by Brazilian defender Renan Lodi. Di Maria was crucial for Argentina, floating in off the right, posing the Brazilian defence all sorts of questions in the first half.

Brazil came back with a vengeance in the second half, with the introduction of striker Roberto Firmino which gave them that extra man in the final third. In the 50th minute, it appeared that Richarlison equalised for Brazil, off a Nicolas Otamendi error, but the goal was disallowed offside by VAR. A few minutes later, Richarlison got a clear chance once more, but his shot was saved by goalkeeper Emi Martinez.

As the match wore on, the game started getting more scruffy, with challenges flying in left, right and centre. Neymar's Brazil looked to be somewhat on the front foot, but couldn't trouble Martinez as much as they hoped.

For Argentina, the midfield of Rodrigo De Paul and Giovani Lo Celso were dogged throughout the game, creating a virtual barrier that allowed Messi to float forward into the more dangerous positions. Neymar played in that free role, with his signature wide dribbling runs, but this just could not be his night.

For Messi, even though he had a quiet game, it was redemption, finally. He has lifted his first major trophy with his country, after losing the Copa America finals of 2007, 2015 and 2016 and the 2014 World Cup, the latter against Germany at the Maracana.

Brazil vs Argentina throughout history

Argentina won the first of them 2-0 in 1937 for the South American championship, the predecessor of the Copa. Brazil won the other three. Brazil beat Argentina 4-2 on penalties to win the 2004 Copa after striker Adriano levelled the game at 2-2 with the last shot in regular time. One year later, the two arch rivals met for the Confederations Cup title in Germany. The Selecao hammered Argentina 4-1 after another great display by Adriano, who was playing alongside Kak and Ronaldinho. Argentina was heavy favorite to win the 2007 Copa, but Brazil crushed Messi's hopes with a 3-0 win in the final. Brazil also beat Argentina in the previous Copa. A 2-0 victory in the semifinal came with goals by Gabriel Jesus and Firmino.