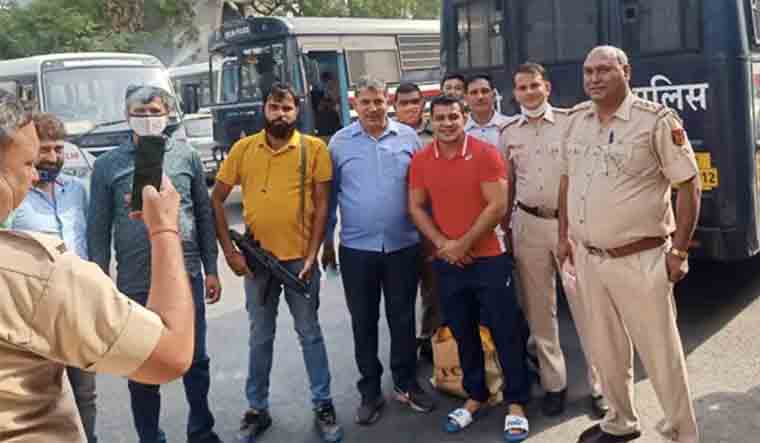 On a day when a Delhi court extended the judicial custody of Olympian wrestler Sushil Kumar till July 9 in connection with the alleged murder of a young wrestler at Chhatrasal Stadium in New Delhi, some Delhi police officers stole the ‘limelight’.

Kumar was shifted today to Tihar jail number 2 from Mandoli jail, where he was earlier lodged. While shifting him, some Delhi police officers chose to click pictures and selfies with the star wrestler. Most of them were not even wearing masks.

The pictures soon went viral on social media, inviting the wrath of the netizens who called the cops ‘shameless’ for treating a ‘murder accused’ like a ‘celebrity’.

Kumar was produced before Metropolitan Magistrate Mayank Aggarwal at the end of the 14-day judicial custody. He is facing charges of murder, culpable homicide, and kidnapping.

Kumar, along with his associates, allegedly assaulted Sagar Dhankar and two of his friends at the stadium on the intervening night of May 4 and 5 over an alleged property dispute. Dhankar, 23, succumbed to the injuries later.

The police have claimed that Kumar is the main culprit and mastermind of the murder and said that there is electronic evidence wherein he and his associates could be seen beating Dhankar.

Kumar was nabbed on May 23, along with co-accused Ajay Kumar Sehrawat. Till now, he has undergone police and judicial custody of 10 and 23 days, respectively.

Ten people, including Kumar, have been arrested so far in connection with the incident.