Hungary took the lead in the first-half injury time 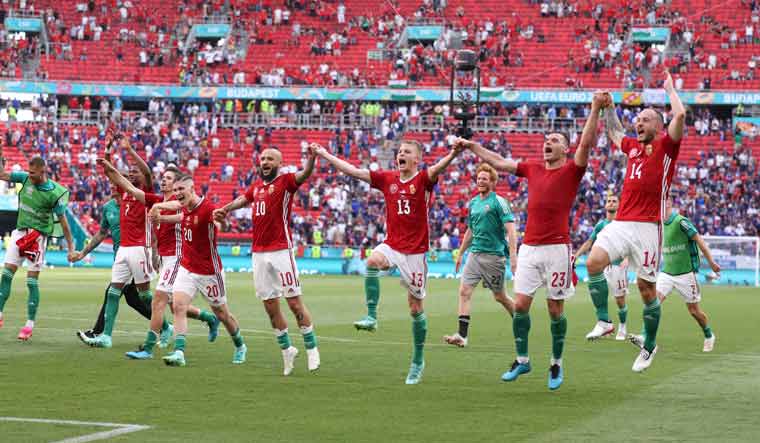 Hungary players celebrate with fans at the end of the Euro 2020 Group F match against France, at the Ferenc Puskas stadium, in Budapest. The match ended in a 1-1 draw | AP

World champions France survived a scare to settle for a 1-1 draw against a gritty Hungarian side in their Group F encounter at the Euro 2020 on Saturday.

Egged on by over 60,000 fans, Hungary took the lead in the first-half injury time when wing-back Attila Fiola and Roland Sallai combined to cut through the French defence, with the former finally beating goalkeeper Hugo Lloris with a low shot at the near post.

Kylian Mbappe saved France the blushes when, in the 66th minute, he chased down a long ball and played it across the goal for Antoine Griezmann to slam it into the net for the equaliser.

There were injury concerns though. Hungary were dealt an early blow when skipper Aadam Szalai was substituted after 26 minutes following a blow to the head. For France, Ousmane Dembele, who gave the much-needed impetus to the French attack after coming on as a substitute for Adrien Rabiot in the 57th minute, limped off injured three minutes from time.

France, with four points, are top of group now. They had eked out a 1-0 goal against Germany, thanks to an own goal from Mats Hummels.

Portugal are second and play bottom side Germany later today. Hungary are third with a point.