It's Djokovic's 40th trip to the final four at any major, Nadal's 35th 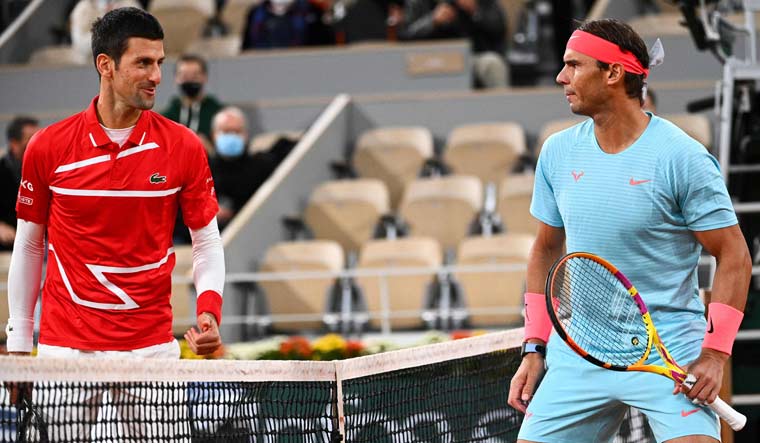 Novak Djokovic wheeled toward his guest box in a nearly empty Court Philippe Chatrier as midnight neared and let out one yell, two yells, three, four.

Once two points from a straight-set victory and seemingly well on his way to a French Open semifinal showdown against Rafael Nadal, Djokovic had to deal with so much that went awry: consecutive unforced errors that gave away a tiebreaker; a 21 1/2-minute delay while spectators left because of a COVID-19 curfew; a face-down tumble that drew blood from his left palm.

Still, the top-seeded Djokovic held on and moved on, pulling out the quarterfinal victory against No 9 Berrettini 6-3 6-2 6-7 (5) 7-5 on Wednesday night.

Now comes a semifinal on Friday against a familiar foe in a rematch of last year's Roland Garros final, but a round earlier: Nadal, who is 105-2 in the clay-court tournament.

Nadal's French Open set streak ended earlier Wednesday. His pursuit of a record-breaking 21st Grand Slam title and what would be a 14th in Paris alone remained very much intact, however.

Nadal shrugged off dropping a set at his favorite event for the first time in two years by whipping violent forehands punctuated with fist pumps and yells of "Vamos!" en route to a 6-3 4-6 6-4, 6-0 victory over 10th-seeded Diego Schwartzman.

Nadal reached his 14th semifinal in Paris; Djokovic his 11th. It's Djokovic's 40th trip to the final four at any major, Nadal's 35th. Nadal and Roger Federer share the men's mark of 20 Grand Slam titles; Djokovic is at 18.

The semifinal will be the superstar duo's 58th matchup, more than any other two men in the sport's professional era; Djokovic leads 29-28. But Nadal is ahead 10-6 in Slam meetings, 7-1 at the French Open.

The other men's semifinal on Friday is No 5 Stefanos Tsitsipas vs No 6 Alexander Zverev.

There were four first-time Grand Slam semifinalists left in the women's bracket, something that last happened at a major during the 1978 Australian Open.

On Thursday, Anastasia Pavlyuchenkova defeated unseeded Tamara Zidansek 7-5, 6-3 to become the first Russian woman to reach a final at a major since Maria Sharapova at the 2015 Australian Open.

Both players struggled with their serves on Court Philippe Chatrier but Pavlyuchenkova managed to hold her nerves better on important points.

Pavlyuchenkova will either 17th-seeded Maria Sakkari or Barbora Krejcikova in Saturday's final.