With the wind in her sails, Nethra Kumanan is working hard to realise her Olympic dreams

At 22, she is youngest and first Indian woman sailor to directly qualify for Olympics 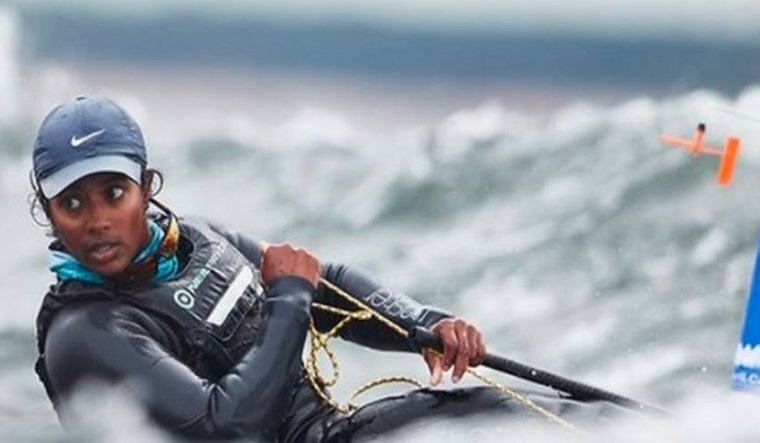 She is just 22-years-old and charts in choppy waters with fair amount of regularity. Chennai girl Nethra Kumanan created history when she became the first Indian woman sailor to qualify for Olympics. No wild card or quota place for her, she has done so by coming first at the Laser Radial event in the Mussanah Open Championship in Oman—a joint Asian and African Olympic qualifier earlier this month.

For Nethra, sailing is more than just a sport. For someone who was initiated into multi disciplines at a young age by her parents, discovering sailing was hitting pay dirt. "It is, I believe, one of the most complex sports. You are not as strong, tough or fast as the winds. The weather conditions change daily. Sailing for me personally is certain amount of freedom, you have to experience it yourself to know," said the young Tokyo bound sailor during an interaction organised online by the GoSports Foundation which has been supporting her Olympic dreams via the FIFS' Stars of Tomorrow programme, along with their partner Dream Sports Foundation. The programme provides support to young athletes transitioning to elite level.

She is glad to be home, to spend time with her parents and her brother for the next three weeks before heading back to her training base in Europe with Tokyo Olympics just 100 days away. This is after a year's gap, having chosen to stay put at her Hungarian coach Tamas Eszes's sailing Academy Gran Canaria in Spain when COVID-19 struck the world and the Olympic qualifiers scheduled to be held in Abu Dabhi last year got cancelled. It is time for her to unwind and relax with her family—it hasn’t been easy being away for so long—as she divided her time between her engineering studies and her sailing.

In her coach's words, she has qualified at a very young age. Women sailors as per data available usually qualify around 24-25 years of age and perform at peak levels around 26 years approximately.

Nevertheless, two-time Olympian Tamas was very impressed with Nethra when he first saw her way back in 2015 during the world championships; she was too young then. "In 2018, her father V.C. Kumanan found us and requested us to let her join our academy. We accepted her in our team, loved her personality. Nethra is a tough girl, for more than a year she stayed at our sailing base. Our work is monotonous, athletes need to go home to get refreshed, but she didn’t. The sports psychologist did a great job to keep her motivated. Lots of days she would get up at 3.30 am for her studies and then start her training at 9.30 am. It’s easy to work with such a strong athlete, they will reach their goals."

Nethra has a full team of support staff helping her especially going into preparation for Olympics, said her mental trainer Mon Brokman. "We work behind the scenes... to qualify for Olympics at 22 is phenomenal. Usually we have experienced sailors qualifying; Nethra has a huge advantage of qualifying at an early age, this won’t be her only Olympics. She is also doing her engineering studies. To be able to manage that and do her Olympic level training is huge."

Captain Jitendra Dixit, joint secretary, Yachting Association of India is pleased with three Indian teams qualifying for Tokyo for the very first time. "We were lacking stars since 2008, getting to participate only through wildcards. Now we have four sailors going to Tokyo having qualified directly; history has been made. We are fully dependent on government funding. Now the sailors are part of Sports Ministry's TOPS programme. The ministry has also increased our funding by 60-70 per cent. SAI funds them for everything—equipment, training, coaches, support staff."

The run up to the Oman qualifier which was moved from Abu Dhabi to Oman at short notice was equally dramatic for Team India and YAI. Dixit said, "It was a nightmare logistics wise. We sent the equipment in March 2020 to Abu Dhabi but then the Covid happened and it got cancelled.  No one knew how long Covid would last. The equipment was lying there in the open, not in best of shape. The qualifier was scheduled for March 2021 but then it got cancelled again. We hired a container to load the equipment and take it by road to Oman but we didn’t have necessary permissions. The other option was to charter boats and send them from Abu Dhabi to Oman. But it’s all worth in the end."

Nethra's father gave credit to the Tamil Nadu Sailing Association for helping his daughter realise her dreams even as the period from 2008-2016 saw the federation in a mess.  "In 2016, we (YAI) didn’t have a coach, other than that we had good coaching programmes at TNSA. At some point of time, Nethra wanted to train in Europe," said her father who has a software business and supported his daughter to the hilt. Nethra did participate in the Asian Games but missed the Rio Olympics in 2016.  Speaking about that, Nethra said, "Rio didn’t happen. Though I was good enough there were certain holes that needed to be plugged. Four years at Tamas's academy helped fill a lot of holes. Consistency in training was key as well as making sure I stuck to my process. Also work on my mental training—earlier I didn’t handle stress well, that showed in my Rio qualification."

Her team is making sure that expectations of Nethra don’t skyrocket. "There are 44 competitors, if Nethra can reach Top 20 it will be very good. I keep saying this is a beginning of her journey. Next Olympics is three years away and we have already started preparing for that," said Tamaz. On her return to Europe, Nethra is looking to train harder with no more competitions scheduled before Olympics.