Shikhar Dhawan all praise for Prithvi Shaw: ‘He has come back as a champion’ 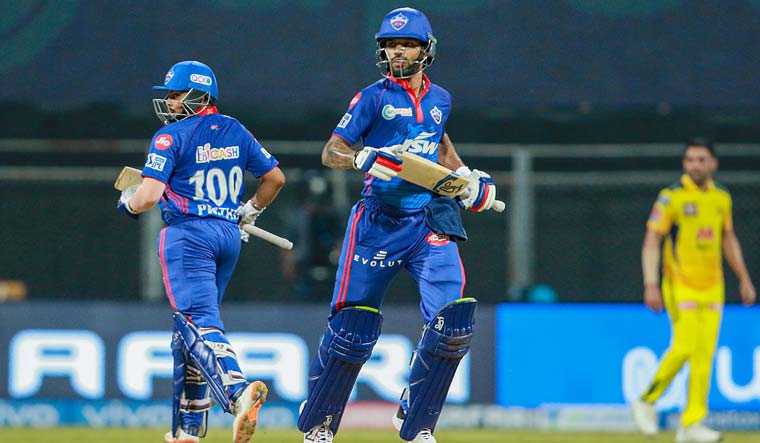 Prithvi Shaw and Shikhar Dhawan of Delhi Capitals during their match against Chennai Super Kings in the Indian Premier League 2021, at the Wankhede Stadium in Mumbai | PTI

Lauding Shaw’s performance, Dhawan said he was happy to see the 21-year-old to “come back as a champion” after going through a rough patch.

“It was lovely to watch Prithvi bat so effortlessly and timing the ball so nicely. He went through a bad patch earlier and has come back as a champion. He did so well in the Vijay Hazare Trophy, scored so many centuries and a double century as well. And now, he has brought the same form in IPL. I am so happy to see him perform that well,” Dhawan said.

Dhawan and Shaw stitched a 138-run partnership for the first wicket during the IPL match against CSK, helping DC chase down the target of 189 with 8 balls to spare.

Shaw went through a poor run of form after having been picked for the Test side during the tour of Australia. However, he could only manage scores of 4 and 0 in the first match in Adelaide, and was dropped from the rest of the series, which India won 2-1.

He was not picked for England’s tour of India which concluded right before the IPL. However, his spectacular performance in the domestic circuit helped him make a fantastic comeback in the game. Shaw led Mumbai to lift the Vijay Hazare Trophy title, having scored more than 800 runs in a single edition of the tournament. He smashed four centuries, including a double hundred.

Dhawan further said that Delhi Capitals were feeling great confidence after their win against Chennai, adding that there is a “positive vibe in the dressing room”.

“Starting a season on such a high note increases the team’s confidence tremendously. There’s a positive vibe in the dressing room now. We prepared well for the match and everything fell into place nicely. I am very happy with the team’s and my own performance. Looking forward to the next game,” he said.