Had forgotten what a competition is like, was very nervous, says shooter Divyansh Singh 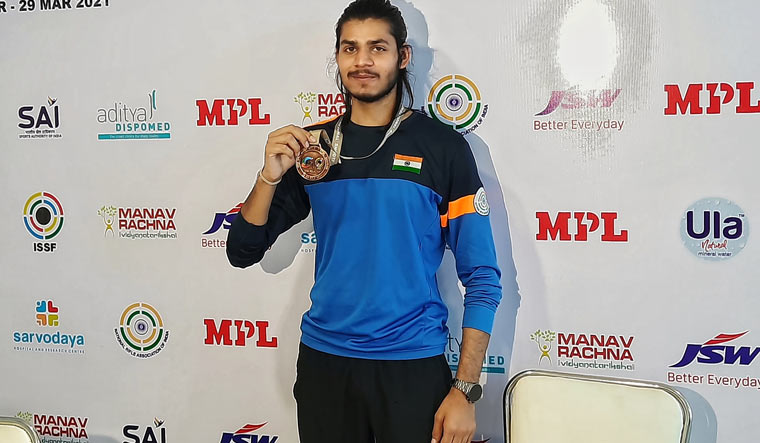 Eighteen-year-old Divyansh Singh Panwar is the current world number one in men's 10m air rifle event. Nevertheless, like all his compatriots, he too is facing a tough task—returning to competitive shooting after a year due to COVID-19. He admitted this after winning the bronze medal in the men's 10m air rifle competition in the ongoing ISSF Shooting World Cup in New Delhi.

For the youngster from Jaipur, many things have changed due to the pandemic. It isn't just his looks that have gone undergone a change—from a close-cropped hair, he now spots a man bun. After winning a hard fought final which saw him getting off to a slow start and then making a comeback of sorts from behind to clinch the bronze, Panwar admitted that he had almost forgotten how to compete in an international competition due to the lockdown. "Something was happening for sure. It was an experience, had forgotten what a competition is like. When I started, I was nervous, my heart was racing. During the lockdown, everything had stopped. The motivation, I had no idea when things would restart, I had forgotten how to shoot," said Panwar after the medal win.

Every time he would hit a shot that was not to his satisfaction in the final match, he would look behind to the team's foreign coach Oleg Mikhailov for guidance and reassurance. "I maintained eye contact with him, he would tell me what to do. I was so blank at times. I cannot handle if one shot goes bad," said the talented shooter who had a super run before the lockdown happened.

Panwar started shooting at the age of 12 in Jaipur, and when his family moved to Delhi in 2017, he took part in junior and youth nationals as well as trials and swept all the medals. This saw him being catapulted to the senior team in 2018. In 2019, he won the gold in the World Cup finals and a silver in Beijing which earned him the quota for the Tokyo Olympics. He also won the gold in Asian Championships in 2019, and the gold medal in the World Cup finals mixed team event in 2019.

For someone whose shooting was going smoothly a year into Olympics, the COVID-19 induced halt has affected him in his comeback. But he is confident of finding his groove once again. "The mental state is very different in national camps or trials. There is good competition there too, but it doesn't feel like a tough fight with your own teammates."

Panwar admitted there is lots to handle in terms of not just competing but also ensuring that he maintains his place in the national team as well as his rankings. “It is a lot of things. When they add up, one has to keep in mind and handle. Its a good experience. "