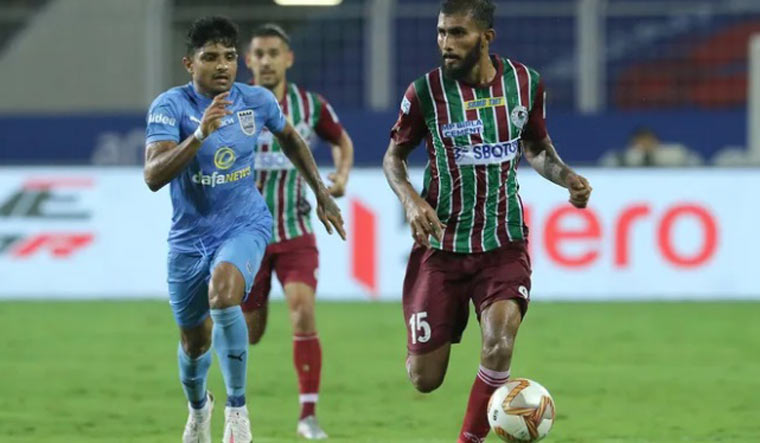 Mumbai City's Amey Ranawade (left) was injured in a collision with Subhasish Bose (right), and play had to be halted for him to be taken to hospital | via ISL official website

A pulsating first half of the ISL 2020-21 final between ATK Mohun Bagan and Mumbai City FC ended on a worrisome note, as MCFC defender Amey Ranawade had to be rushed to the hospital off the field at the Fatorda Stadium in Goa.

Ranawade is suspected to have sustained a head injury while going for a sliding tackle. He was seen in tremendous pain, and was unable to stand up initially despite efforts from the medics on the ground. The players of both the teams and the support staff were seen in a state of shock.

As per the ISL official Twitter account, the 23-year-old is stable now, but is still under observation. More details are awaited.

Before the incident, there was some entertaining display of football from the two top teams. It was ATK Mohun Bagan who were quick off the blocks, with David Williams's shot being deflected out for a throw-in.

Mumbai had a shout for penalty turned down in the 11th minute, when Pritam Kotal seemed to have pulled down Bipin Singh inside the box. The referee, however, turned down the appeal.

The next minute, ATK Mohun Bagan's Javier Hernandes hit the crossbar off a free-kick. The Mariners had another great chance in the 16th minute when Roy Krishna shot at the goal from an acute angle from the left, but Arindam Singh made a fine one-handed save.

ATK Mohun Bagan deservedly took the lead two minutes later when MCFC's Ahmed Jahouh lost the ball outside the box and an alert Williams buried it into the right corner of the net.

But Mumbai City were back on level terms in the 29th minute, when ATK Mohun Bagan defender Tiri headed a long ball from Jahouh into his own net, while trying to head it back to his goalkeeper Arindam Bhattacharya.

Mumbai almost doubled their lead in the 31st minute when Hugo Boumous blasted a shot straight at the goal but Bhattacharya managed to punch it out. Five minutes later, Bipin Singh almost got his head to a lovely curled ball from the right from Adam Le Fondre but Bhattacharya once again came to the rescue.

The first half, however, ended on a sad note with Ranawade injured in a collision with Subhasish Bose, and play had to be halted.