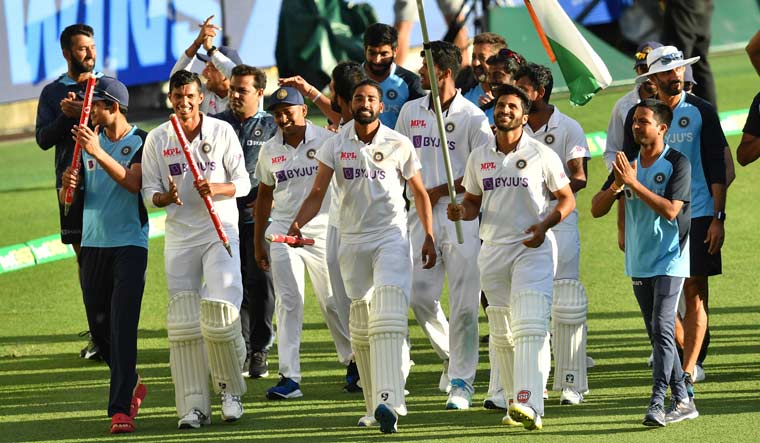 The victorious Indian team is finally back home after a gruelling but historic two-month tour to Australia. Among the factors which made the Test series triumph special is the fact that India won with almost a second-string side in the decider at the Gabba, because of injuries to most of the senior players, especially the bowlers – Mohammed Shami, Jasprit Bumrah, Ravichandran Ashwin and Umesh Yadav.

Understandably, Team India bowling coach Bharat Arun had his hands full. He was forced to push young, hitherto untested bowlers into uncharted territories. The situation was so dire that by the final Test, the bowling attack was being led by one Test match-old Mohammed Siraj. But, his wards responded to the challenge brilliantly, sticking to the plans, rarely erring, bowling with intent and a big heart, helping India to one of their finest Test match and series wins.

But, it was no flash in the pan, and was due to a well thought-out strategy, as Arun revealed to the media today in an interaction organised by the BCCI. "[Coach] Ravi Shastri called me sometime in July and said that we needed to take the off side out of the Australians. So, we had our own analysis and we felt most of the runs Smith and Labuschagne scored and most of Aussie batsmen, they had got lot of runs out of the cut, pull and on the off side," the 58-year-old said. Arun said they also learnt from how the New Zealand bowlers, especially Neil Wagner, troubled Smith during their series. "We took a cue out of the NZ attack. When they bowled to Steve Smith, they had bowled bodyline to him and he felt very uncomfortable. So, Ravi called up and said 'I want you to make a plan where you eliminate the off side out of the Australians'.

"He said we will attack straighter lines and have an onside field so it is very difficult for batsmen to be consistently clearing the onside fields. That really worked for us."

Lauding India's strong bench strength, Arun said that it was the result of plans put in place three years ago. "If you need India to keep on doing well at international level, you will need a pool of bowlers. At any given point of time, you must be able to field a fresh set of bowlers who will be raring to go. Now we are blessed with a great bench strength. It's heartening to see that, when given the opportunity, they have done an excellent job for the country. This tour will give them the necessary confidence to do well in future. It's an embarrassment of riches, but we can't take away the credit for what the senior bowlers like Mohammed Shami, Ishant Sharma and Umesh Yadav have done for India.

"This tour has taken a lot out of the boys, but now in future when you have seven fast bowlers raring to play for the country. With the number of Tests we are going to play - four against England here and five in England - it will be very handy. They will all be rotated and we will make sure the best team is put forward," he said.

Arun gave credit to Shastri for insisting on holding back all the extra bowlers after the white-ball series in Australia. "I thought it was a great move by Ravi Shastri to hold back all the bowlers who had come with the team. After the ODI series, most of them were to go back, but he probably thought that if anything happens to any player, it would be difficult for them to come back because of the quarantine restrictions. We said we will manage with everyone here and because they were here with us for a long time, it was possible for them to understand what was demanded to be successful in Australia and work on those lines. So, them being with us helped a great deal."

Arun said the reason why the inexperienced pace attack performed well under pressure was that during practice sessions, they had meticulously discussed and worked on their plans. "Siraj has knack of taking wickets. He was magnificent in Ranji Trophy and with India A. Shardul has time and again got more than 40 wickets with Mumbai. Saini has pace, and Natarajan is a left armer, which gave us the option to have a new bowling angle. All we talked about was to be consistent. The margin of error in Test cricket is very small. Every time, in nets, they had to decide what lines they would bowl and my job was to give feedback, assess how satisfied they were with their work. The match became an extension of the nets.”

Arun said the key to India doing well in Australia and winning the series 2-1 was the fearlessness with which the players played. He said Shastri was clear that he would rather lose than play a conservative game. "You fear when you have certain goals in mind and only think of the outcome and don't have a process in place or don't want to lose games. We, as a team, insist we don't mind losing. Even after Adelaide, Ravi said 'I don't mind us losing 4-0 but we are known for a brand of cricket and that should not change'. That's the message that went to the team and it paid rich dividends. The Gabba test was a testimony to it. The way Rishabh Pant and Washington Sundar played... they took the fight to the Aussies. They were not thinking of drawing the match but of how to win. That takes a lot of courage; that is fearlessness."

The bowling coach also said that at no point did the team discard its five-bowler theory, which has been key to India's success away from home, despite depleting resources. "On most occasions, we play five bowlers abroad because to bowl out a team in conditions abroad demands a lot out of just four bowlers. It's a huge task."

The thoughts of playing an extra batsman did creep in after the Adelaide debacle but the team stuck to its beliefs, said Arun. "In the last Test there were discussions about playing an extra batsman but we felt that it would have been a negative move and all of us felt the five-bowler theory has worked for us. We knew Washington Sundar is more than a capable bat," said Arun.

He said that batting coach Vikram Rathour and support staff ensured all the players got equal time and attention in nets, including the practice bowlers. "Washington, though he was a net bowler, used to bat every day for half an hour. We needed to spend extra hours in the net but we needed to give each and everyone the attention. In the end it paid off," said Arun.

The bowling coach indicated that it will be horses for courses when it comes to selecting the playing XI now, with so many options available, and that someone like leg-spinner Kuldeep Yadav, who last played a Test match in 2019, would get his turn. "Horses for courses is the best thing and when Kuldeep gets a chance to play, he will show what he can do because he is bowling magnificently now and in India when we play these four Tests it will be his time.

"And also the spinners Jadeja and Ashwin have been magnificent, number one and two spinners in the world. Jadeja's rise as an all-rounder is a huge-huge bonus for the country," he said.

With the England series set to start in two weeks, Arun said it's time now for the team to get ready for the tough series. "As R. Sridhar, our fielding coach, said: It took us two days to forget 36 all out, put it behind us, and move on. We did an exceptional job in Australia, and the last two days we have enjoyed and savoured our success. But, we need to forget this now. We are aware that England is a tough team and we will have to be at our best to beat them. We are quite prepared."