Australian Open: How players are coping with quarantine 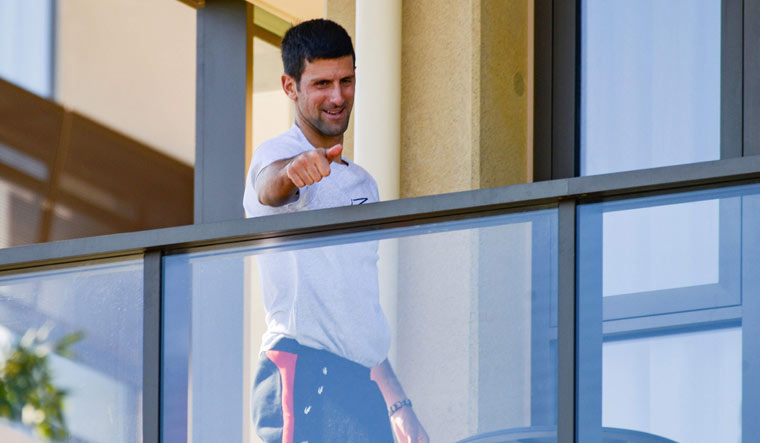 Novak Djokovic gestures from his hotel balcony in Adelaide, one of the locations where players have quarantined for two weeks upon their arrival ahead of the Australian Open in Melbourne | AFP

With no way out, tennis players in lockdown are figuring out ways to keep themselves fit within the confines of their Melbourne hotel rooms as they prepare for the Australian Open.

Angelique Kerber, who won the Australian Open in 2016, spent her birthday in quarantine on Monday. At times in the past, she's spent the day playing or preparing for matches in the later stages of the tournament.

This year, with the season-opening Grand Slam event not starting until February 8 because of travel restrictions related to the COVID-19 pandemic, she had to settle for a message posted on social media by Australian Open organisers to mark the occasion.

Kerber is among the 72 players doing hard quarantine for 14 days after a five positive coronavirus tests were returned from charter flights that brought almost 1,200 players, coaches, officials and media to Melbourne for what has previously been dubbed the Happy Slam.

That means those players won't be allowed to leave their hotel rooms or practise for 14 days, creating a two-speed preparation period for the tournament. Others in less rigorous quarantine will be allowed to practise for five hours daily.

Those outdoor sessions started on Monday in Melbourne. A smaller group of players who landed in the South Australia capital of Adelaide, including Serena Williams, Naomi Osaka, Novak Djokovic and Rafael Nadal, are also allowed outside to practise under bio-secure protocols.

Players such as Yulia Putintseva and Belinda Bencic initially complained in social media posts about being ill informed of the quarantine rules but have found ways to practise indoors by hitting balls against walls and windows and setting up other unique sessions.

Some players have expressed anger at being classified as close contacts merely for being on board charter flights with people who later tested positive. But local government, tennis and health authorities have said all players were warned of the risks well in advance.

“There's been a bit of chatter from a number of players about the rules. Well, the rules apply to them as they apply to everybody else, and they were all briefed on that before they came and that was a condition on which they came,” Victoria state premier Daniel Andrews said Monday.

There's no special treatment here ... because the virus doesn't treat you specially, so neither do we.”

Responding to unconfirmed reports that Djokovic, an eight-time Australian Open champion, had proposed a list of ideas to change the quarantine conditions for players, Andrews said: People are free to provide lists of demands, but the answer is no. Australia's international borders are mostly closed, although there are exemptions in special circumstances. All arrivals must do mandatory quarantine. Each of Australia's states and territories has its own border and travel restrictions, and those can change on very short notice.”

Victoria state, which has Melbourne as its capital, accounted for 810 of Australia's 909 deaths from COVID-19, most of those during a deadly second wave three months ago which resulted in curfews and lockdowns for the city.

So, there's been some debate locally about whether it's right to stage a Grand Slam tournament bringing in people from parts of the world where the coronivirus is still taking a big toll.

With that in mind, Australian health and government officials aren't taking any chances.

So far, three people from a Los Angeles to Melbourne flight have tested positive since landing in Australia and have been transferred to a medi-hotel, along with Sylvain Bruneau, the coach of 2019 US Open champion Bianca Andreescu, who flew in from Abu Dhabi, and another person who travelled from Doha, Qatar.

All passengers on those three flights, including a total of 72 players, are in enforced hard quarantine. So far, no players have returned positive tests since arriving in Melbourne or Adelaide.

Players have been warned that breaching the rules could result in fines or being moved to a more secure quarantine complex with police stationed at their doors.

Victoria state COVID-19 quarantine commissioner Emma Cassar said over the weekend there would be “zero tolerance" for people trying to breach the rules.

This is designed to make people safe, said Cassar, who is also in charge of the state's prisons. We make no apologies for that.

Being unable to leave their hotel rooms would mean the only workouts some players are able to have would be on exercise equipment left in the rooms.

Australian Open tournament director Craig Tiley remains adamant the tournament will start February 8, saying organisers would have to manage an environment over the next 14 days for those who won't be able to practice.

“It's a tough situation," he said in a weekend television interview.

“We've got to do whatever we can to make it as fair as possible for those players that are in lockdown.”