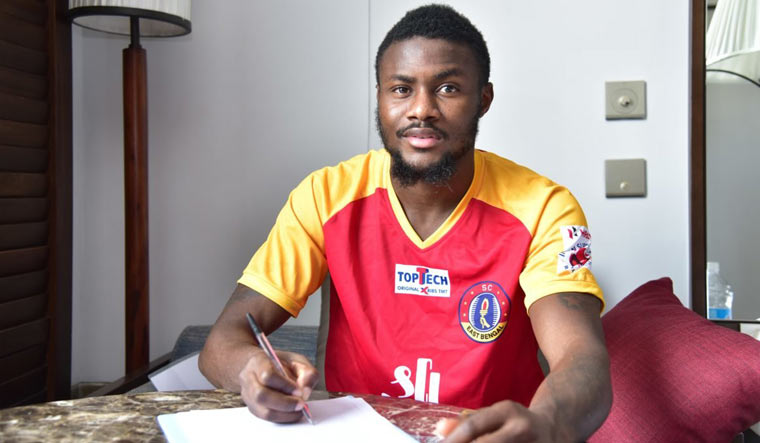 SC East Bengal have not had the best of debuts at the Indian Super League. With just three points after seven matches, the legacy club is in the tenth position on the points table, with only Odisha FC below them.

Though they have former Liverpool legend Robbie Fowler as the head coach, the limited time they got to put together their squad has not helped at all. The team have leaked goals—13, which is the highest by any team so far this season. But the most worrying aspect has been their inability to score goals. They have the joint-lowest number of goals—5.

But, things seem to be looking 'bright' for SC East Bengal now. Literally. On Friday, they announced the signing of young Nigerian forward Bright Enobakhare for the remainder of the season.

The 22-year-old last played for Greek club AEK Athens. He is a product of the Wolves Academy and made 49 appearances for the Championship winning Wolverhampton squad, netting three goals.

Enobakhare also joined Scottish Premiership club Kilmarnock on a six-month loan deal and then spent the remaining part of the season with League One side Coventry City. He found the back of the net six times in 18 appearances for Coventry City.

"I am absolutely delighted with the signing of Bright. I have had a good few chats with him, given him our vision and our beliefswhat we want to achieve here. He has accepted them with an open mind," Fowler said.

"The signing of a young, talented and very good player adds to our squad. I will stress how young and talented he is. If you look at the foreign players who have come in, the likes of Matti Steinmann are fairly young for foreign players in this league," Fowler added.

Enobakhare expressed his delight at joining the squad.

"It is the biggest club in India and offers me a fresh challenge. The Indian Super League is growing at a rapid pace and I believe I can fulfil my potential there," Enobakhare said.

"I know the league is already underway and I have to quickly get along with the squad and I am ready for that. I am really looking forward to the challenge ahead," he added.