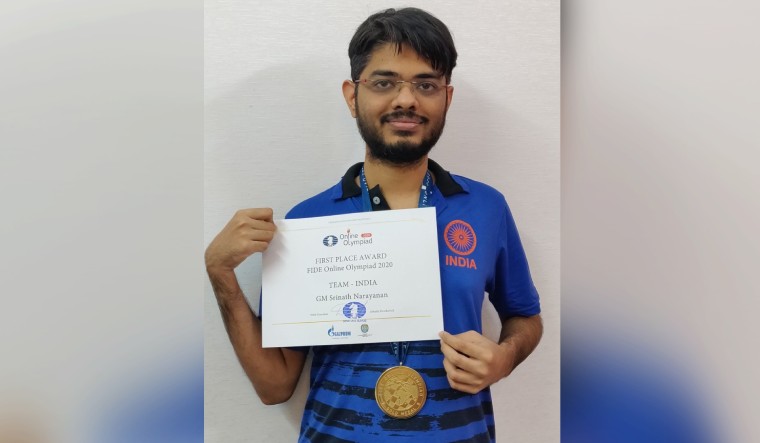 Srinath Narayanan posted the image and narrated the incident on Twitter

When India won its first ever gold medal in the International Chess Federation (FIDE) Online Chess Olympiad in August this year, it was a moment of triumph notwithstanding the fact that the team shared the honour with Russia. Many, including Prime Minister Narendra Modi, congratulated the team on their victory. However, the sad reality of our chess heroes was evident by the manner in which customs department officials treated them—the team had to pay customs duty on their gold medals in order to receive them.

This surprising piece of information was shared on Twitter by the Indian team vice-captain Srinath Narayanan, who revealed that it took a week for them to receive their medals. The prestigious chess tournament was held online this year because of the pandemic, and hence the team’s medals were sent over.

“The medals are here! Thank you @FIDE_chess. On the way to dispatch them to the rest of the team now. It wasn’t easy getting it! It reached from Russia to India in three days, but took more than a week to reach from Bangalore to Chennai, and had to pay customs duty!” He wrote on Twitter on Wednesday.

The medals are here! Thank you @FIDE_chess. On the way to dispatch them to the rest of the team now.

It wasn't easy getting it! It reached from Russia to India in three days, but took more than a week to reach from Bangalore to India, and had to pay customs duty! pic.twitter.com/vVGAbFQ8N5

However, as per a central government notification dated June 30, 2017, medals and trophies won by Indian sports team members for participating in international tournaments are exempt from customs duties.

As per a report on Mint, Narayanan said that the medals were dispatched around November 19-20. It reached Bengaluru in the 23rd. However, it took another week for the medals to arrive in Chennai, and that too, after paying the customs duty.

He further said that he had to provide multiple documents to customs officials before he was allowed to collect the medals. He said the customs officials had opened the package and asked him details about the contents. Narayanan said that he even had to give them an official document on its chemical composition.

But it didn’t end there. After the medals reached Chennai, the courier service, DHL Express India, asked him to pay customs duty. Narayanan revealed that he paid Rs 6,300 as he was “so tired of all this”.

The report further said that the chief commissioner of customs at Bengaluru has agreed to look into the matter.