Maradona’s ‘Hand of God’ jersey could be yours; here’s how 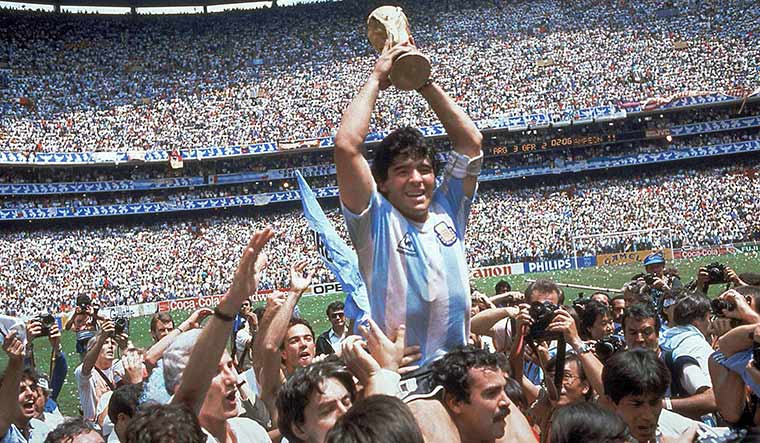 (File) Diego Maradona holds up the World Cup trophy, after Argentina beat West Germany 3-2 in the final at the Atzeca Stadium, in Mexico City | AP

While the world may have seen the last of Maradona in the flesh, a particular artefact of his has caught everyone’s attention. One of the most iconic moments of his career has been the ‘Hand of God’ goal against England in the 1986 World Cup quarter-final. The jersey that the legendary Argentine wore could be your and as expected, it comes along with a hefty price tag.

According to an auction agency, the jersey could be bought for $2 million. The agency, Golding Auction believes the owner could agree to a private sale of $2 million. The jersey is currently on display at the National Football Museum in Manchester, England. The current owner of the jersey is Steve Hodge, a former England International who featured in the 1986 World Cup quarter-final between Argentina and England. Hodge said that Maradona had given the shirt to him, while they exchanged jerseys following England’s controversial defeat to Argentina.

Sports memorabilia surrounding Maradona have increased in price following his death. From rookie football cards of the Argentine that could fetch over $20,000 to personal artefacts, the asking rate has more than doubled since his death. Maradona passed away on November 25. His funeral, which was supposed to last for three days, was called off abruptly at the request of the family due to unmanageable crowds. He had recently undergone a surgery to remove a blood clot in the brain and was under observation at home.