‘Give me 14 days with your wife’: Marlon Samuels to Ben Stokes in abusive post

The rivalry between the two cricketers goes back to 2015 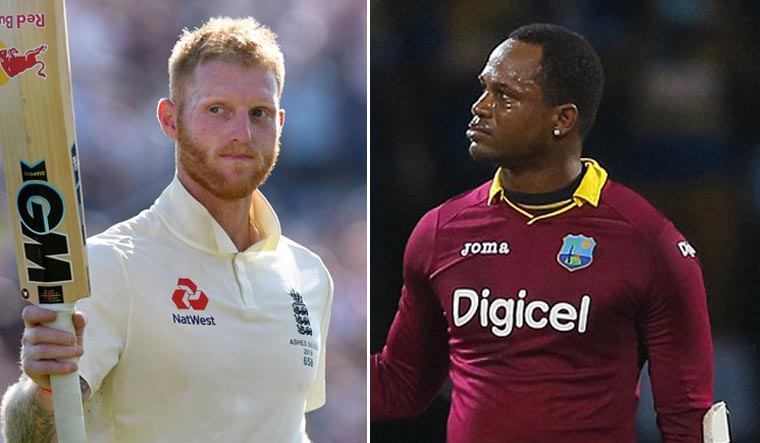 West Indies cricketer Marlon Samuels went on an abusive rant against England cricketer Ben Stokes on social media, even dragging the latter’s wife into the matter implying that she could spend 14 days with him and he would turn her Jamaican in 14 seconds. 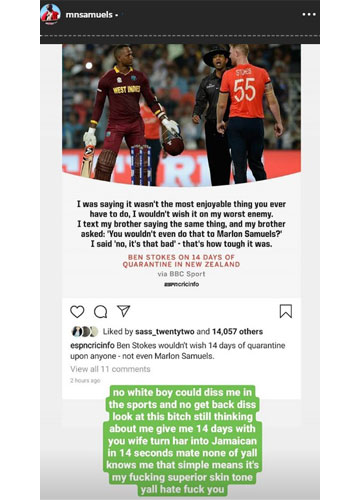 “No white boy could diss me in the sports and no get back diss look at this b*tch still thinking about me give me 14 days with you wife turn har into Jamaican in 14 seconds mate none of yall knows me that simple means it’s my f***ing superior skin tone (sic),” he wrote on his Instagram stories, responding to a post by ESPNcricinfo.

Samuels’ response is over Stokes’ earlier interaction on an IPL podcast in which the New Zealand-born player joked that he wouldn’t wish the 14-days quarantine on his worst enemy. At this, his brother had asked if he wouldn’t wish it even on Marlon Samuels, and Stokes said no.

The rivalry between the two cricketers goes back to 2015 when Samuels had dismissed Stokes during a Test match in Grenada and sent him off with a mock salute. Things heated up once again in 2016 during the T20 World Cup final when the England cricketer made some comment to Samuels.

During the recent podcast with Test Match Specials (TMS), Stokes was asked about undergoing quarantine while visiting his ailing father in New Zealand halfway through the Test series against Pakistan and also upon reaching Dubai for the Indian Premier League.

“You get off the plane, get your bag, walk out and get told what hotel to go to. There’s no choice, it’s pot luck whether you get a good hotel or not. The government have chosen certain hotels to be the quarantine hotels,” the 29-year-old said.

“I posted a few Instagram stories and some of the England boys were messaging me asking what it’s like and I was saying it wasn’t the most enjoyable thing you ever have to do, I wouldn’t wish it on my worst enemy,” he added.

“I text my brother saying the same thing, and my brother asked: ‘You wouldn’t even do that to Marlon Samuels?’ I said ‘no, it’s that bad’ – that’s how tough it was,” the Rajasthan Royals player joked.

Samuels, however, chose to respond to the banter in the most disgraceful way by dragging Stokes wife into the matter. In another post, he also targetted Australian legend Shane Warne.

“ICC cricketing world ben b*tch stokes Shane b*tch warn and a few b*tch west Indians cricketers who sell out sextillion7thpower nothing to f*ck with my army bigger and we richer (sic),” he wrote in the post, captioning it ‘yes I am the bad guy so what!’.

#sextillion7thpower yes I am the bad guy so what!

Many on social media found Samuels’ abusive post sickening and called him out for being racist and his unruly behaviour.

This is appalling @marlonsamuels ... we are trying to stamp out racism ... !! A bit of banter by ⁦@benstokes38⁩ should not lead to this ... pic.twitter.com/QkdAAUKLWm

Something tells me this won’t go away quietly.... pic.twitter.com/iYg0uDBjQq

Stokes has not responded to Samuels’ vile rant yet.