Rabada is currently the Purple Cap holder, having taken 21 wickets in 10 matches 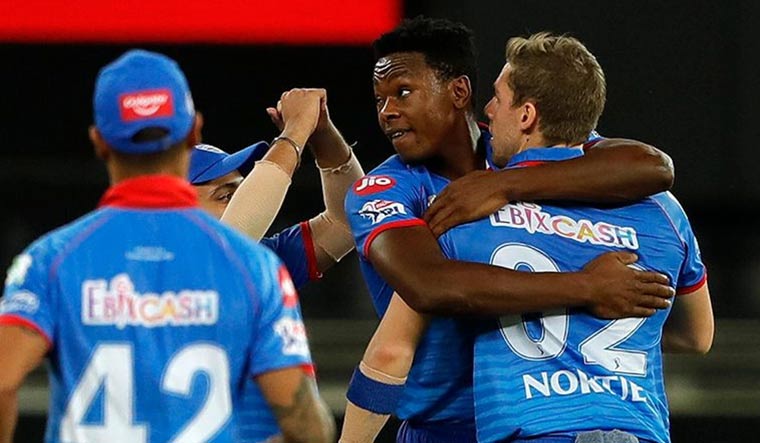 Delhi Capitals players celebrate the wicket of Robin Uthappa of Rajasthan Royals during their IPL 2020 match at the Dubai International Cricket Stadium | iplt20.com

With senior bowlers Ishant Sharma and Amit Mishra out of IPL 2020 with injuries, it was left to Kagiso Rabada to lead the Delhi Capitals bowling attack. And he has done it with aplomb so far. The 25-year-old South African pacer has bowled with precision and control with the new ball, and has been effective in the death overs, too. Rabada is currently the Purple Cap holder, having taken 21 wickets in 10 matches at an economy rate of 7.58.

His partnership with fellow Proteas pacer Anrich Nortje has been the highlight of the varied and brilliant DC bowling attack. Rabada's controlled aggression has been a perfect foil for the raw pace of Nortje.

In a media interaction ahead of the Delhi Capital's match against Kolkata Knight Riders on October 24 at the Sheikh Zayad Stadium in Abu Dhabi, Rabada opened up on the different conditions and adjustments needed while playing in the UAE, his partnership with Nortje, the captaincy of Shreyas Iyer and the current environment in DC, which has made the team perform together as a unit. Most importantly, he underlined the importance of respecting every human being's dignity and freedom—a learning imparted by Nelson Mandela during his fight against racism in South Africa. Excerpts from the interaction:

On the adjustments in line and length that he had to make while bowling on three different grounds.

Line and length stays pretty much the same in all conditions you play in. If anything at all, you might want to adjust on the fuller side since wickets are a bit slow and the ball can sit up. It depends on conditions that you are faced with on the particular day. You need to find the length that will work for that particular wicket. You start with normal 6-7m length then later, depending on whether wickets are slowing down or there is dew, see what sort of adjustments you need to make. Also, what the game demands you to do—take wickets or be bit more defensive.

How have the conditions in UAE been different from India?

It is different. Conditions are quite tricky here. We are playing on fresh wickets at certain times, sometimes unused wickets. Sharjah, in the beginning, was really flat but then slowed down—scores went from 210 to 180. Dubai scores in beginning were 180 but are now getting to 170-160. I feel that there is some seam movement, sometimes, especially in Abu Dhabi but all pitches are definitely on slower side. They are a different kind of slow compared to India. Conditions in UAE have something for all players—spinners and fast bowlers and batsmen. You have to work hard for your wickets and runs.

The impact Nelson Mandela had on him and lessons learnt.

It's awesome bowling with him. He has done really well. He has a lot of pace, is always willing to learn and he is open to new ideas. That's a great trait to have. At the end of the day, we have a job to do and I think we have done well so far. Now, hopefully, we qualify for the knockouts—we are one win away from doing so. To be called one of the most lethal partnerships in IPL history is quite some feat but we are playing one game at a time.

Was the loss against KXIP a wake-up call for DC?

It is about not panicking and reinventing the zeal. We already have assessed, and we have been talking of the game and where we can improve. There were a few negatives in that game but we also need to look at the positives. All we need to do is get back up and be ready for the next game, having identified what we have done right or wrong and make those minor adjustments.

What aspect of your bowling are you enjoying the most this IPL?

I enjoy bowling whenever I have the ball. It's a challenge for me when I bowl two (overs) upfront and two at death or three upfront. Cricket is my passion and I am glad to be doing what I am doing. My job is to take wickets, not go for runs and whenever I get the ball that is what I try to do.

Your thoughts on Shreyas Iyer's captaincy.

Shreyas Iyer has been unbelievable as captain. Young and leading overseas players on big stage like IPL—it's no mickey mouse stage. He's leading from the front. Ricky Ponting and other senior players are helping him a lot. It's a very liberal environment and not a dictatorship, which is one of the reasons we have been successful. He has all the tools around him.

You have mentioned that skill levels of players this IPL has been phenomenal. Can you elaborate?

Batters are really skilled, playing all sorts of shots. Wrist spin and finger spin, too, is making impact. There have been quite a few dropped catches that has been an issue in this tournament. It's not been easy somehow. I have dropped a few but some of the catches that have been taken are phenomenal. The games are just going right to the death this IPL. One thing I won't forget about this IPL is every team is in it till the end; no team has won until the last ball has been bowled. The competitiveness is second to none.

The key to your consistency in T20 bowling.