Put some respect on the name: Gayle on pointing to ‘The Boss’ on his bat 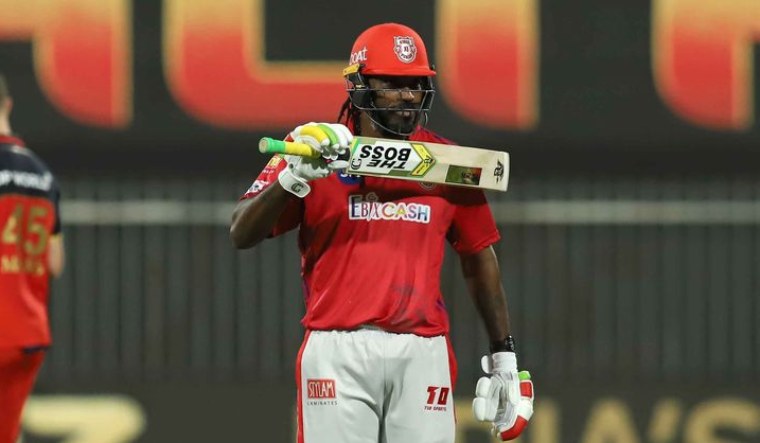 KXIP player Chris Gayle points to his bat after reaching his half-century | iplt20.com

Chris Gayle made a memorable IPL 2020 debut for Kings XI Punjab on Thursday with an explosive half century, helping the team in the successful run-chase against Royal Challengers Bangalore. Having missed the early league matches due to an illness, the West Indies cricketer came back with a bang, smashing a four and five sixes during the KXIP innings.

KXIP also won their second match in the tournament, having gone winless in the past five games in a row.

Gayle, along with captain K.L. Rahul and Mayank Agarwal, guided their team to a much-needed victory. And when Gayle reached his fifty, he was seen pointing to the sticker on his bat that read ‘The Boss’; almost like he was making a point here.

In a chat after the match, Gayle explained why he came in at no.3 and pointed to ‘The Boss’ sticker on his bat when he hit half-century.

“It was a very sticky surface, very slow, but it was better batting second. Team asked me to do a job at 3 and it wasn’t an issue. Openers been batting well throughout the tournament and we didn’t want to disturb that. Like I said, I was given a job and took it,” Gayle said.

“(On pointing to his bat) All I was saying, put some respect on the name. That’s all,” he added.

Gayle, who has just recovered from a bout of food poisoning, also talked about his health and fitness.

“I thought it was important to keep fit, I don’t like being on the bench but I was enjoying it and apart from the sickness I have been getting fitter,” he said.