‘I know how much it hurts when you bang your head like this,’ Tendulkar said 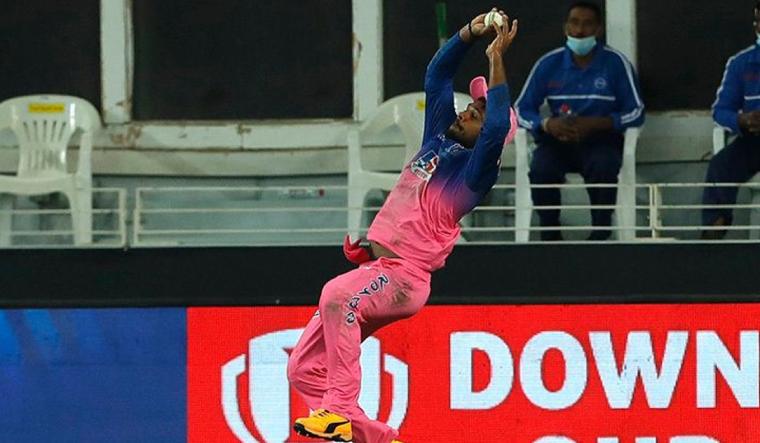 Rajasthan Royals player Sanju Samson has been hogging the limelight since the beginning of the 13th edition of the Indian Premier League in the UAE. The Kerala cricketer has dazzled spectators and the cricketing fraternity in his first two matches, smashing 85 and 74 against Kings XI Punjab and Chennai Super Kings, respectively.

Samson may not have excelled with the bat during RR’s IPL encounter with Kolkata Knight Riders, but he did take a stunning catch to dismiss Pat Cummins that only reaffirmed the assessment made by several former cricketers that he would soon play in all formats for Team India.

India legend Sachin Tendulkar also can’t seem to be getting enough of Samson’s performance this season. Earlier, he had commended the young batsman for his terrific batting against KXIP.

This time, Tendulkar lauded the 24-year-old for his “brilliant catch” that also evoked some memories for the Indian batting great, who tweeted that he knew “how much it hurts to bang your head” on the ground.

“Brilliant catch by @IamSanjuSamson! I know how much it hurts when you bang your head like this on the ground. I experienced it in the 1992 World Cup in our match against the WI when I took a catch,” he tweeted.

I know how much it hurts when you bang your head like this on the ground. I experienced it in the 1992 World Cup in our match against the WI when I took a catch. #IPL2020 #RRvKKR

Soon after, he retweeted a video clip shared by a Twitter user, showing a split screen of the catches taken by Tendulkar during the 1992 World Cup match against the West Indies and of Samson to dismiss Cummins in the IPL. Both players are seen touching their heads gingerly after hitting the ground.

Tendulkar thanked the Twitter user for sharing the video.

Thanks for sharing this! 🙂 https://t.co/2r4e7cEdCm

After taking the catch, Samson was checked by the physio and given the green light to go ahead and play the rest of the match.

During RR’s chase of 175, the young batsman could only manage 8 from 9 balls. KKR won the match by 37 runs.

Later, the Royals said in a tweet that he still found a way to “wow us”, sharing a picture of Samson taking the catch.