‘When will I stop getting dragged into cricket (related issues)?’ she asked 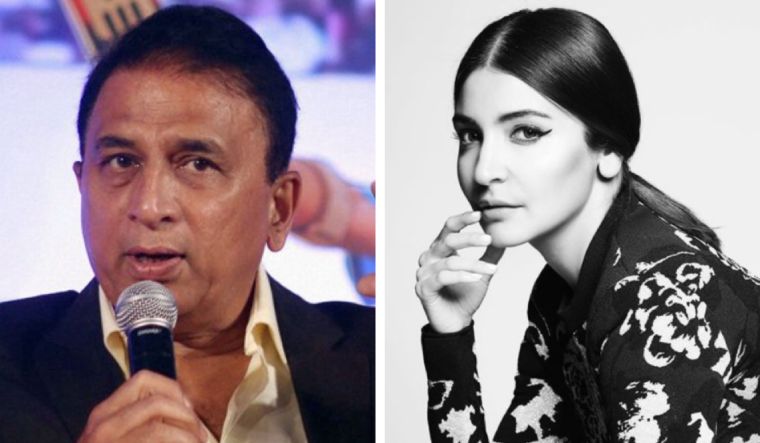 Bollywood actor and India captain Virat Kohli’s wife Anushka Sharma has responded to certain remarks allegedly made by former cricketer Sunil Gavaskar during commentary in the IPL match between Royals Challengers Bangalore, captained by her husband, and Kings XI Punjab.

After Kohli’s forgettable outing against KXIP on Thursday, when he dropped centurion K.L. Rahul twice and was able to score just one run during RCB’s innings, Gavaskar allegedly made a tasteless comment on the RCB captain’s performance by dragging in his wife’s name.

“Ab jo lockdown tha toh, sirf Anushka ke bowling ki practice ki unhone, voh video dekhiye. Usse toh kuch nahi banna hai (He only practiced against Anushka’s balls/bowling during the lockdown. See the video. That won’t help),” he is believed to have said during commentary, and this has caused an outrage on social media. He was referring to a video posted during the lockdown on social media which showed Kohli practising his batting as Anushka bowled.

Anushka took to social media to respond to the comments. 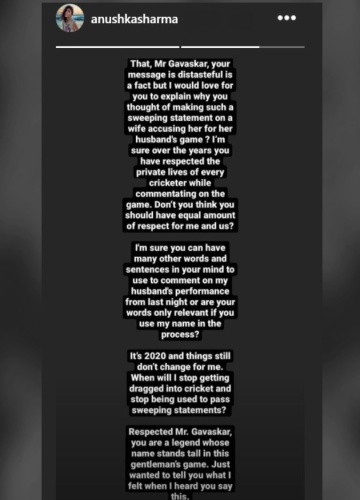 Anushka Sharma posted her response on her Instagram stories

“That, Mr Gavaskar, your message is distasteful is a fact but I would love for you to explain why you thought of making such a sweeping statement on a wife accusing her of her husband’s game? I’m sure over the years you have respected the private lives of every cricketer while commentating on the game. Don’t you think you should have equal amount of respect for me and us?

“I’m sure you can have many other words and sentences in your mind to use to comment on my husband’s performance from last night or are your words only relevant if you use my name in the process?

“It’s 2020 and things still don’t change for me. When will I stop getting dragged into cricket and stop being used to pass sweeping statements?

“Respected Mr Gavaskar, you are a legend whose name stands tall in this gentleman’s game. Just wanted to tell you what I felt when I heard you say this,” Anushka posted on her Instagram stories.

Anushka has been at the receiving end of hateful and vile messages even before when Kohli underperformed in matches, prompting fans to attack her for “distracting” their cricket hero. However, her husband’s success is rarely credited to her.

The couple recently announced that they are expecting their first child.