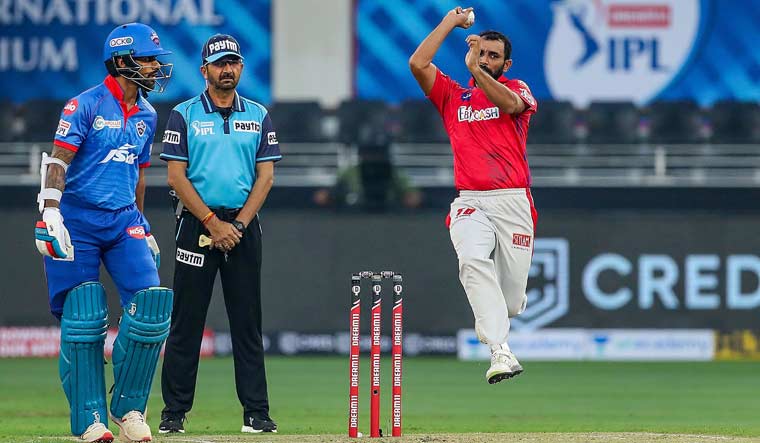 All-rounder Marcus Stoinis came to the rescue of a beleaguered Delhi Capitals, with a 21-ball 53, helping them post a respectable 157/8 against King XI Punjab, in an IPL 2020 match in Dubai.

Stoinis hit seven fours and three sixes as 57 came off final three overs. The last over bowled by Chris Jordan went for 30 runs, with Stoinis hitting three fours and two sixes off him.

Captain Shreyas Iyer (39 off 32 balls) and Rishabh Pant (31 off 29 balls) then steadied the ship in the middle overs with a 73-run third wicket stand, before both fell in consecutive overs.

Mohammed Shami with figures of 3 for 15 in four overs was pick of the KXIP bowlers while IPL debutant Ravi Bishnoi took 1 for 22.

'Universe Boss' Chris Gayle and India's Test vice-captain Ajinkya Rahane did not make it to the playing XI of KXIP and DC respectively.

For KXIP, Jordan, Glenn Maxwell, Nicholas Pooran and Sheldon Cottrell were the four overseas players while DC picked Anrich Nortje, Stoinis, Hetmyer and Kagiso Rabada in their side.