The world is at a COVID-19 crossroad, best exemplified by the Premier League

Is it time to reopen? In that case, is a second wave of virus lying in wait? 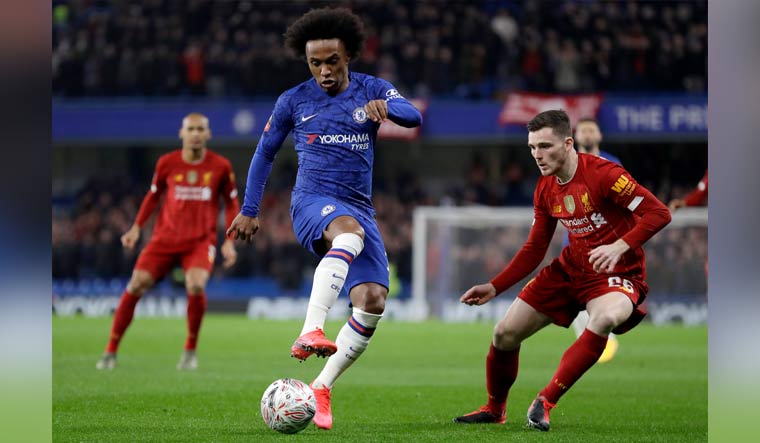 Player at the top of the league raises concerns about playing again:

Player near the bottom raises the same concern:

Yeah well you just don’t want to be relegated 😂🤷🏽‍♂️

Even as the third richest sporting league in the world is considering resuming its season, there is a growing disquiet among players over safety issues and divisions over proposals on how to end the season. There is undoubtedly a fear of player safety. In addition, when it comes to arguments against the resumption, financial interests play a big role. The clubs at the bottom of the league, which face the risk of relegation into a lower tier, and in extension a significant financial downgrade, are the ones that argue that the integrity of the competition would be compromised under the present plan. Overall, there are massive financial stakes at play for the Premier League—multiple reports have estimated that the clubs stand to lose estimated 1 billion pounds ($1.2 billion) if the season is not finished, but 760 million pounds of that come from TV contracts that would be satisfied if games were played behind closed doors.

Premier League chiefs hope to return to action in June, but that goal could be scuppered by this internal battle. For those clubs and players concerned about the rush to return, British PM Johnson's admission that the virus transmission rate is still too high to significantly ease the lockdown until at least June 1 was hardly reassuring. Adding to the growing unease about the League's desire to finish their remaining 92 fixtures, football club Brighton claimed that a third player in their squad had contracted the virus. Norwich City midfielder Todd Cantwell summed up the feelings of worried players when he responded to the positive test at Brighton by tweeting: "We are just people too".

We are just people too 🤷🏼‍♂️ https://t.co/XMKH9FYhsJ

Restart or reset: A global debate

The fractures within the English Premier League are more or less an accurate reflection of the divisions and chasms in the global polity facing a coronavirus crossroad. On one hand is the need to restart economies at a time job losses are rising by the millions, and populist discontent is on the rise. On the other are growing fears of a second wave of the dreaded virus. The question is clear: Should the world set its gears grinding again, learning to live with the scourge, or should it wait for a reset—a journey 'back to the future' where there were no hazmat suits in supermarkets and gas masks in the playground?

In the US, there were armed protests even as President Donald Trump called on many unwilling states to reopen the economies and lift lockdown. In Michigan, by April end, an armed militia rallied outside the state capitol to protest against Democratic Governor Gretchen Whitmer. Hundreds returned two weeks later, some of them armed, to demonstrate inside the statehouse. Fractures are evident in the US, where about half of the 50 states are easing their shutdowns, to the alarm of public health officials.

In UK, the British government is pushing to reopen the economy, but Scottish leader Nicola Sturgeon has pushed back, warning that acting too fast could let the virus wreak havoc again. "Any significant easing up of restrictions at this stage would be very, very risky indeed," Sturgeon said. Britain and the US are two countries that took the most damage from the pandemic.

In France, more than 300 mayors in the Paris region have urged President Emmanuel Macron to delay the reopening of schools, set for Monday. Many mayors around the country have already refused to reopen schools, and many parents will keep their children home even where they are functioning again. The mayors called the timing untenable and unrealistic, saying they were put on a forced march to get schools ready without enough staff or equipment.

Italian regional governors are pressing to open shops and restaurants, just days after the country began easing its two-month lockdown by allowing 4.5 million people to return to work in offices and factories. Governors want to be allowed to present their own plans for reopening, tailored to the rate of infection and economic needs of their regions. After an outcry from the nation's Roman Catholic bishops, Italian Premier Giuseppe Conte announced that public Masses will be allowed to resume on May 18.

Spain is facing a political crisis, with support for the government crumbling after seven weeks of a strict lockdown, with some regions and opposition parties demanding an end to the state of emergency declared on March 14. The government argues that it is far too soon.

The scheduled return of Germany's Bundesliga from May 16 had raised hopes that the Premier League could follow suit, yet there are stark differences between the health crisis in both countries. Britain's death toll from the pandemic passed 30,000 this week to become the worst hit country in Europe. By contrast, Germany has registered just over 7,000 deaths. But, issues plague the leagues in both Germany and Spain. German second tier club Dynamo Dresden put their entire squad and coaching staff into two-week isolation after two players tested positive for the virus. On Sunday, Spanish La Liga confirmed five unnamed players have the virus and will go into quarantine.

Brighton chief executive Paul Barber has been one of the more vocal critics of the Premier League restart scheme and he told Daily Mail : "We have got to be careful that we do not misstep here because if we do, it could ruin lives. It could cost lives. And we cannot afford that."

There is a lack of unity within the Premier League over multiple different issues. Take the case of the Premier League plan to go forward with matches at neutral venues. League chiefs believe they will only get the government's green light to restart if the number of venues are limited to reduce the medical, police, security and broadcast personnel required. There are also fears over fans congregating at home stadiums, eventhough the matches would be played behind closed doors.

The UEFA deadline for restart proposals is May 25 and League Managers Association chief executive Richard Bevan has warned a failure to reach consensus soon could see the season cancelled.

Aware of the animosity between clubs, Crystal Palace chairman Steve Parish conceded it won't be easy to restart in the current climate. "It may prove beyond us. We have huge challenges in order to get it back to complete the season but we are planning on doing so," Parish said, reported the BBC. "There are no easy answers. We have to work through it as a collective. I think we will come out with a consensus in the end."