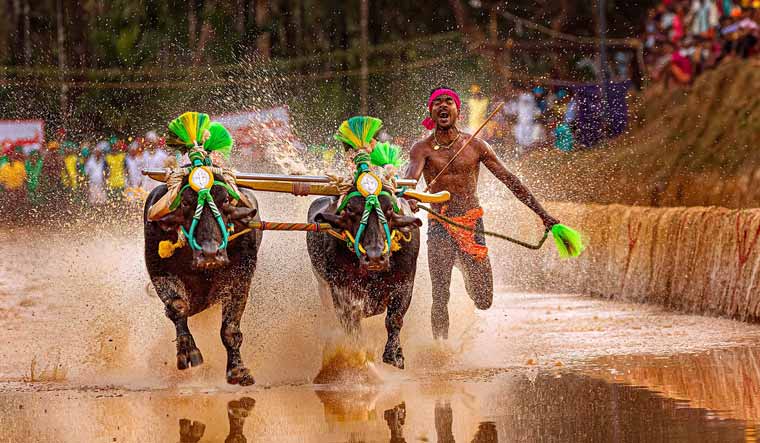 In this undated photo, Kambala jockey Srinivas Gowda participates in a buffalo race in Karnataka | PTI

Gowda, a construction worker from Moodabidri, took just 13.62 seconds to run a distance of 142.3m, covering the first 100m in 9.55 seconds, at the traditional Kambala (buffalo race) at Aikala village near Mangaluru, prompting netizens to compare him with Bolt, whose 100m world record is 9.58 seconds. Gowda sparked a social media frenzy with his record-setting performance, prompting Sports Minister Kiren Rijiju to ask SAI top coaches to conduct trials.

But, according to Sports Authority of India sources, Gowda declined to take part in the trials. "He (Gowda) has reached Bengaluru today to meet the Chief Minister [Yediyurappa]. A team from SAI, Bengaluru is in CM's office to talk to him and take him to the SAI centre," a source told PTI. "But apparently, he is not interested. We have also learnt that he is suffering from an injury."

Rijiju, however, on Monday, chose to blame the media for blowing the matter out of proportion. "Media can't control things with people writing anything in social media these days. If any talent comes to our notice we will give him a platform, an opportunity," Rijiju said after the launch of Khelo India University Games' official anthem at his residence.

"The standard of Olympics and world championships is very high. People who play traditional sports, you can't suddenly compare them with international champions unless we don't assess them officially, check their records.

"If any one can send an amateur video, we can't accept it. We want to give it an official trial. We will take a proper trial under top coaches and if there is talent, if there is potential to go the distance, then we will bring them in national camp," he added.

Rijiju had declared on Twitter on February 15 that “We are team @narendramodi ji and will do everything to identity sporting talents!”

Yes @PMuralidharRao ji. Officials from SAI have contacted him. His rail ticket is done and he will reach SAI centre on monday. I will ensure top national coaches to conduct his trials properly. We are team @narendramodi ji and will do everything to identity sporting talents! https://t.co/RF7KMfIHAD

Gowda himself had dismissed comparisons with Olympic champion Bolt. "People are comparing me to Usain Bolt. He is a world champion, I am only running in a slushy paddy field," he was quoted as saying.