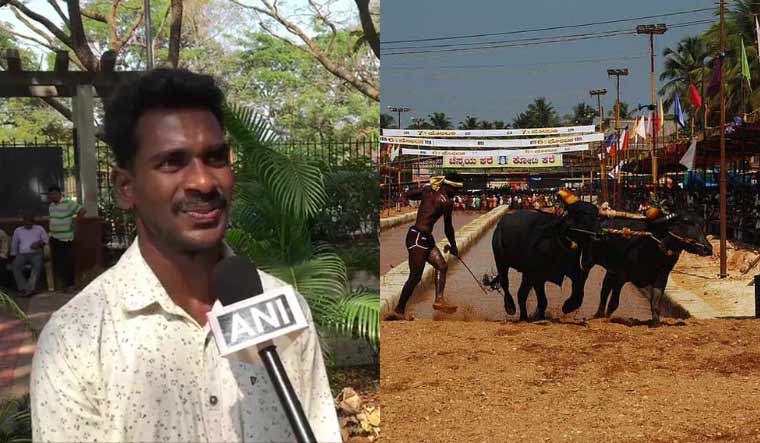 Usain Bolt has been to field athletics what Donald Bradman was to cricket: A legend monopolising records. But the Jamaican thunderbolt may just have met his match from an unexpected place—a paddy field in southern Karnataka.

Srinivasa Gowda, a jockey in the traditional buffalo race of Kambala, has been making headlines in the past few days since he won a 145-metre race in just 13.62 seconds. This works out to covering a distance of 100 metres in 9.55 seconds, better than Usain Bolt's record of 9.58 seconds. So Gowda completed 100-metre mark .03 seconds faster than Bolt.

Kambala involves a jockey driving a pair of buffaloes across a paddy field. The sport has been popular in villages of Dakshina Kannada, Uttara Kannada and Kasargod in Kerala for centuries. Kambala races are typically held in the period from November to April.

A referee in a Kambala event told The New Indian Express, "Gowda is on a record-breaking spree during the current Kambala season. So far, he has bagged 29 prizes in the 12 Kambalas he participated in during the current season. He created a new record by winning prizes in all four categories at the Aikala event, which is a first in the history of Kambala."

Gowda, a school drop-out, works as a construction labourer.

Despite the achievement, the head of the governing body of the sport, the Kambala Academy, was cautious about comparing Gowda to Usain Bolt. Professor K. Gunapala Kadamba told BBC Hindi that Olympic event monitors use "more scientific methods and better electronic equipment to measure speed".

The differences between the two events—Kambala and sprinting—must also be emphasised. While sprinting happens on a synthetic track, Kambala happens on slushy, uneven paddy fields. Moreover, a Kambala jockey also has added momentum from the two buffaloes, who he drives using a rope.

Gowda himself has been self-effacing. Speaking to ANI, Gowda claimed, "People are comparing me to Usain Bolt. He is a world champion, I am only running in a slushy paddy field."

However, Union Sports Minister Kiren Rijiju is already impressed and has promised trials for Gowda by coaches of the Sports Authority of India. Rijiju tweeted, "I'll call Srinivasa Gowda for trials by top SAI coaches. There's lack of knowledge in masses abt standards of Olympics especially in athletics where ultimate human strength & endurance are surpassed. I'll ensure that no talents in India is left out untested."

Rijiju was responding to a tweet from industrialist Anand Mahindra, who demanded a "gold medal" for Srinivasa Gowda. Mahindra tweeted, "Just one look at his physique & you know this man is capable of extraordinary athletic feats. Now either @KirenRijiju provides him training as a 100m sprinter or we get Kambala to become an Olympic event. Either way, we want a gold medal for Srinivasa!”