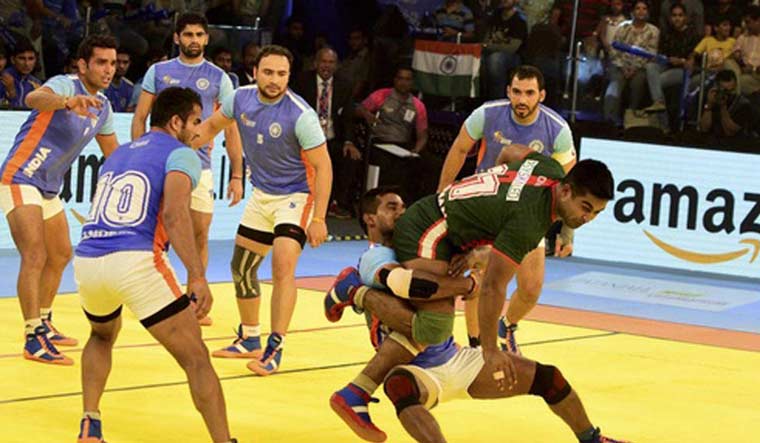 The Amateur Kabaddi Federation of India (AKFI) has written a letter to its Pakistani counterpart, asking it not to allow the "unauthoried" Indian team, which is under investigation by the Sports Ministry, to use the national flag during Sunday's final of the circle style World Cup.

Around 45 players accompanied by a group of some 12 officials and coaches had travelled to Pakistan without any official permission or clearance to participate in a tournament called 'Kabaddi World Cup'.

The final of the tournament will be held at Lahore on Sunday between India and Pakistan.

However, the AKFI made it clear that it has not sanctioned any kabaddi team's visit to Pakistan for a tournament and asked the Pakistan Federation to not allow the team to use 'India' in the jersey or track suits that the players would be wearing.

"AKFI has requested Pakistan Kabaddi Federation not to permit any individual to play any 'Kabaddi World Cup' to represent 'India'. The individual should not be allowed to wear jersey/track suits with the name 'India'. They cannot use India flag," AKFI said in the letter.

"AKFI is not aware if any 'Kabaddi World Cup' has been organised in Pakistan. AKFI has not received any official invitation from Pakistan regarding any such World Cup. AKFI has not permitted any team to go to Pakistan and play any Kabaddi match there. No such permission was sought by any individual/ team from AKFI and AKFI doesn't not support any such activity.

"The individuals cannot represent 'India' without prior permission of AKFI and clearance from Ministry of Youth Affairs and Sports, Ministry of Home Affairs and Ministry of External Affairs. The event is not recognised by AKFI and the individual players playing there, won't get any benefit whatsoever," the letter added.

A contingent from India had reached Lahore last Saturday via the Wagah Border to take part in the championship. Pictures and footage of the Indians arriving in Lahore had surfaced on social media platforms, kicking up a storm.

However, the International Kabaddi Federation (IKF) president Janardhan Singh Gehlot on Tuesday had said that the tournament is not recognised by the apex body.

In the letter, the AKFI sought further information regarding the players and officials and asked the Pakistani body to submit relevant documents.

Circle kabaddi is slightly different from standard kabaddi, which is part of the the Asian Games.

While the standard format has seven players, below 80kg in weight, per side, circle kabaddi features eight, without any weight restrictions, and the field of play is a circle.