RCB seem to be determined to put their past behind them, literally 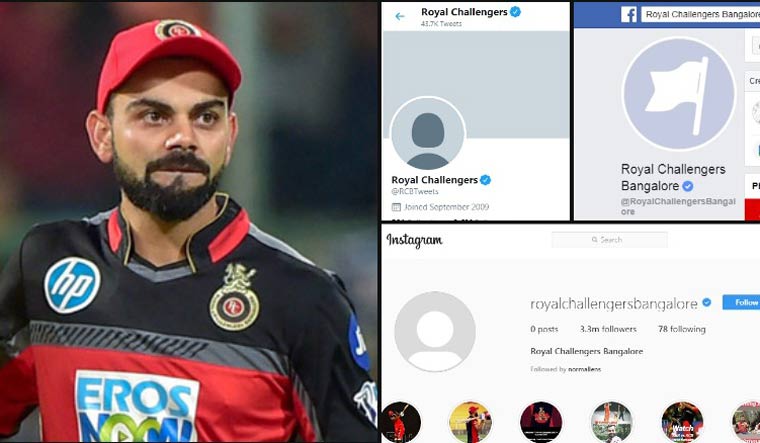 Royal Challengers Bangalore have, arguably, been Indian Premier League's surprise package. That is, despite having stalwarts like Virat Kohli, AB de Villiers, Chris Gayle, Dale Steyn, Mitchell Starc, Yuvraj Singh in their ranks over the years, they have surprised everybody by hardly making a mark in the tournament.

Ahead of the upcoming IPL season, RCB seem to be determined to put their past behind them, literally. On Wednesday, RCB deleted all their Instagram posts and also removed the profile pictures and cover photos from their Twitter and Facebook pages. The word 'Bangalore', too was dropped from the name on Twitter.

The move comes a day after they inked a three-year deal with Muthoot Fincorp Ltd, a part of the Muthoot Pappachan Group, popularly known as Muthoot Blue. The partnership of title sponsor for the team includes the "jersey front" logo placement, which will be prominent on the playing and training jerseys, in-stadium integration at home matches, digital and other high visible media platforms, a statement said.

The change has led to speculations over a new name and a new logo for the team. Along with fans, RCB players like Yuzvendra Chahal and de Villiers took to Twitter to 'inquire' about the changes to the social media accounts. It may well be a strategy to unveil the rechristened team or logo. Even, commentator Harsha Bhogle tweeted asking about it.

Arey @rcbtweets, what googly is this? 🤔 Where did your profile pic and Instagram posts go? 😳

Some reports suggest that 'Bangalore' in the name might be changed to 'Bengaluru', and that the announcement will be made on February 16.

RCB have roped in Mike Hesson as director of cricket, and Simon Katich as the head coach for IPL 2020. Kohli will remain the skipper.