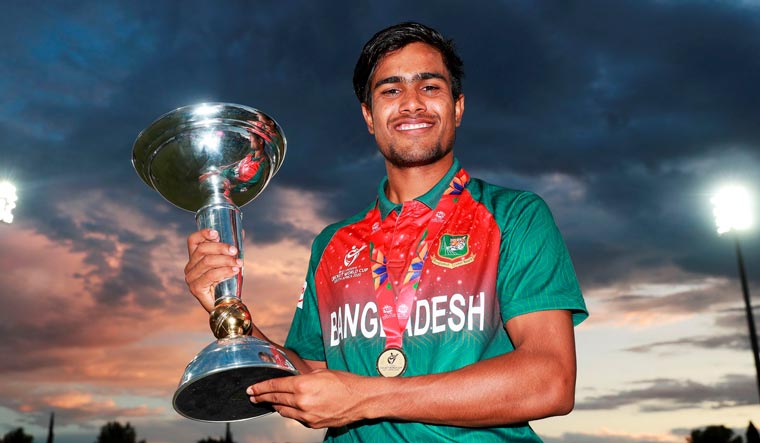 Bangladesh U-19 team captain Akbar Ali poses with the World Cup trophy after they beat India in the final at JB Marks Oval, in Potchefstroom | PTI

Bangladesh captain Akbar Ali battled the pain of losing his elder sister while steering his team to the U-19 World Cup triumph, the tragedy far outweighing the challenges thrown at him by his adversaries on the ground.

At the forefront of the country's win in the title clash against favourites and defending champions India was its 18-year-old skipper Akbar, whose elder sister Khadija Khatun died while giving birth to twins on January 22, according to a report in leading Bangladesh daily 'Prothom Alo'.

Akbar was not informed about the tragedy back home but he found out through one of his brothers.

"Akbar was closest to his sister. She loved Akbar a lot," his father was quoted as saying by the newspaper.

"We did not want to inform him at first. He then called after the Pakistan match and questioned his brother why he was not kept in the loop. I did not have the courage to talk to him. I don't know what to say," his father added.

In a low-scoring final, Bangladesh first bowled out India for 177 in 47.2 overs and then did well enough to chase down a revised target of 170 in 42.1 overs under the Duckworth-Lewis method. They had three wickets in hand when the winning runs were scored.

Having witnessed Bangladesh's victory against Zimbabwe in a Group C game on January 18, Khadija could not see her brother lead the country to its biggest cricketing triumph with a gritty, unbeaten 43.