Roy Krishna is like an elder brother to me: Sarpreet Singh

Singh spoke of learning from stars like Lewandowski and Coutinho 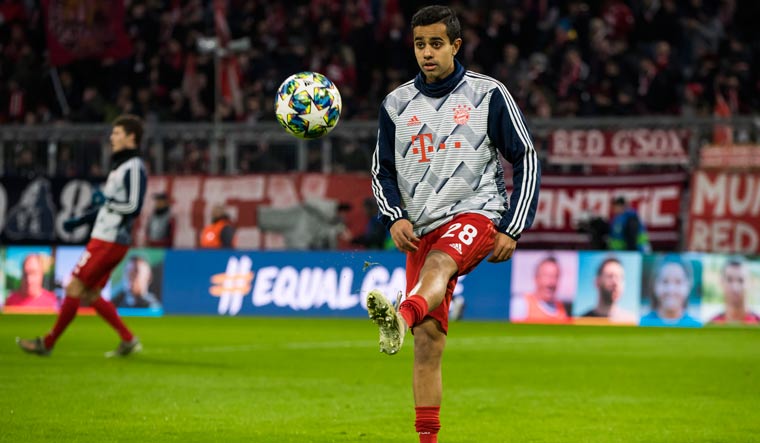 Bayern Munich's Indian-origin player Sarpreet Singh is all praise for the professionalism in the Indian Super League, and says that bringing in foreign players like his ex-teammates Roy Krishna and David Williams is raising the standard of the game in India.

On the club's international media day, the New Zealand international spoke to select journalists from India over the phone about life in Munich, his Indian roots and shared his thoughts on Indian football, among other things.

Singh, 20, is the first Indian-origin player to play in the Bundesliga, Germany’s top football league. He came on as a substitute in Bayern's league match against Werder Bremen on December 14, 2019. The attacking midfielder played eight minutes of that game after replacing Brazil’s Phillipe Coutinho, who scored a hat-trick that day.

He joined Bayern Munich before the start of the 2019-20 season, after two years in the senior squad of Wellington Phoenix, New Zealand's only club in the Australian A-League. It was in Wellington that Singh played with Krishna, another player with Indian roots, and Williams. Both players play for Kolkata-based ISL team ATK. Krishna is among the top scorers in the ongoing ISL season, with eight goals so far.

"Roy was the best player in the A-League last season and Willo was his strike partner. They are a deadly duo," said Singh. "I think they bring the standard to a higher level being foreigners in India. You always need that to push all the local players to keep striving and keep getting better. They are two examples of great people and good professionals.

"Roy to me was like an elder brother at Wellington. He always looked after me and gave me advice and tried to show me the way forward. I tried to learn as much off him. Even today, I have conversations with both of them, Roy more so. From what he tells me, (ISL) is quite a good league and everything is quite professional over there. So it is quite pleasing to hear things like that. It is good to see Indian football improving."

Singh, who was born in Auckland, said his parents hail from a village near Malpur in Punjab. "For me, growing up in an Indian family, is the same like most (people), he said. "I have been back to India three times. Growing up, I used to eat mum’s food, which is the best. I can speak Punjabi to a certain degree."

Ever since his arrival on German shores, Singh has impressed his coaches. He has regularly featured for the Bayern reserve team, Bayern Munich II, which plays in 3. Liga, the third division of German football. In his 15 appearances so far this season, Singh has scored four goals and assisted seven. With such numbers to flaunt, he is often called up to the first team bench, one of which gave him his debut.

He is enjoying the major step up he has taken from the A-League to European football. One can imagine what it must be for a young, aspiring attacker to get to train alongside world-class players like Robert Lewandowski, Thomas Mueller and Phillipe Coutinho. And Singh is lapping up every little takeaway from these sessions.

"Lewandowski is an absolute goal-scoring machine," he said. "For me to be able to learn little techniques like what part of the foot he uses and at what time... it does come to specific minor details and down to decision making. If I’m looking at Coutinho, I look at what he does in tight spaces and how he scans his shoulder and gets out of tight situations. I play [as a] number ten as well, so there’s no one better to learn from than Coutinho."

Singh is slowly fitting in with the locals, and to do this, he takes German lessons thrice a week. Other German youngsters like Joshua Kimmich and Serge Gnabry have helped him settle in and adapt to the change in environment.

When asked whether his move to Germany could inspire young Indians and New Zealanders to follow the same path, Singh spoke about the importance of working hard. "There are lot of good Indian players, and they can get opportunities for sure, but it about trusting the process and sticking to your routine, day in day out," he said. "You can't just do it for one week, you have to do it for years and years. I think it is certainly possible... From what I hear from Roy and Willo, the facilities are getting better, the standards are higher in India and they do similar trainings like what we do here in Europe. So I think it is certainly possible."

With six appearances so far for the New Zealand national team, Singh is aspiring to help his country go places. He made his debut in 2018 in a friendly against Canada and has been a regular ever since. His only goal so far came against Kenya in the 2018 Intercontinental Cup held in India. It was in that tournament that he also played against India, in Mumbai, a game which New Zealand won 2-1.

But despite the presence of players in top European leagues like him, Winston Reid and Chris Wood, New Zealand football is yet to shine on the global stage. The country's last and only second World Cup appearance was in 2010, and is currently ranked 122 by FIFA. But Singh sees better days round the corner.

"We’re on the right way now with the players we’ve got," he said. "The players we are producing now want to play good football and are brave in position. Even in New Zealand football is changing and the way it is played and perceived. We are in the right path and hopefully you'll see us in the next World Cup."