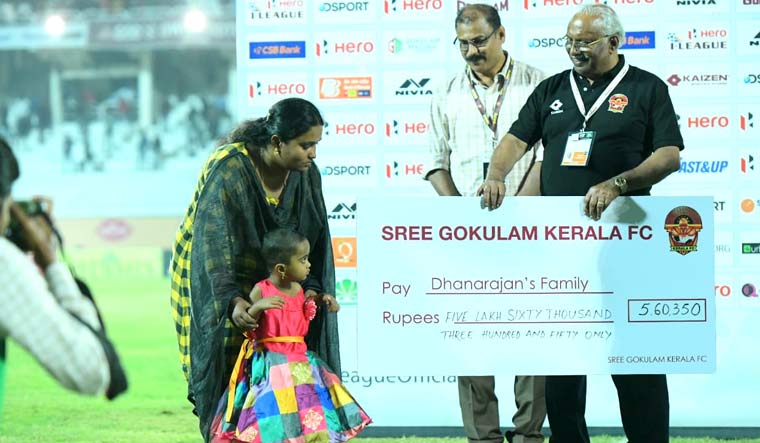 Rs 5,60,350 was collected and the cheque was handed over to Dhanarajan's wife and child | via Twitter

In a touching gesture, I-League club Gokulam Kerala FC donated the money collected from the ticket sales of Sunday's match against Churchill Brothers to the family of deceased footballer Dhanarajan Radhakrishnan.

Around 25,000 people turned up for the match at the EMS Corporation Stadium in Kozhikode. Several former and present-day footballers, too, bought tickets in bulk to help Dhanarajan's family. Rs 5,60,350 was collected and the cheque was handed over to his wife and child.

Dhanarajan suffered a cardiac arrest while playing a seven-a-side match in Kerala on December 29. The 39-year-old had played for Kolkata giants Mohun Bagan and East Bengal, Chirag United and Mohammedan Sporting.

A special thanks to the heroes of Indian football, it wouldn’t have been possible without you all! 💥🧡🙏🏾#Malabarians #IndianFootball #TicketForACause pic.twitter.com/jyaU7jqxHM

The match ended in Gokulam Kerala's favour, with a 1-0 win over former champions Churchill Brothers. A first-half strike from Marcus Joseph sealed in the tie in the home side's favour.

Both sides went into the game suffering losses in their previous encounter. While the visitor's coach Bernardo Tabares rang in four changes, some of them forced, like that of the injury to top striker Willis Plaza, Gokulam's Spanish coach Santiago Varela brought in Afghan Haroon Amiri and Sebastian in place of Jestin George and Salman, who had started the last game.

The first clear chance of the game came Gokulam's way in the 18th minute to centre-back Andre Ettienne. Ugandan forward Henry Kisekka then missed the best chance in the first half-hour, catching Churchill keeper Jaffar Mondal well outside his line, but his attempt at lobbing over the keeper missed by a whisker.

The hosts broke through in the 38th minute via their talisman Marcus. Amiri got the assist with a wonderful ball into the box piercing the left-side of the Churchill defence.

The Trinidadian striker gamely followed through and his rasping drive beat Mondal to bulge the Churchill net. This was his fifth goal of this season's league and it duly got him another Hero of the Match award.

Gokulam now move up to fourth on the table, winning half of their eight completed games for 13 points, while Churchill will move a spot down to sixth with 10 from seven games.