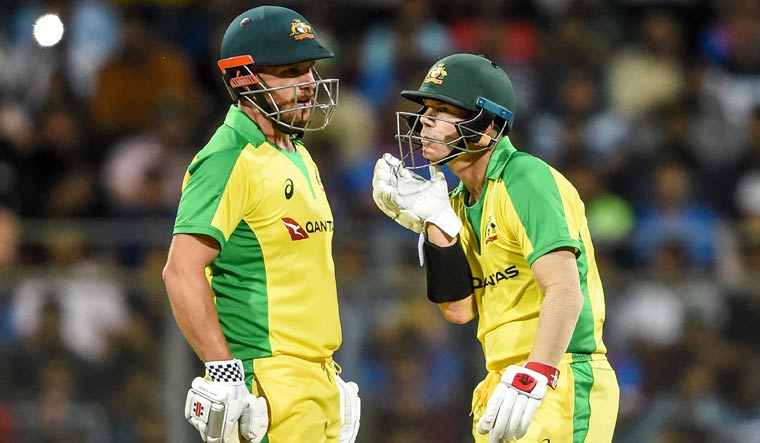 Australian openers David Warner and Aaron Finch made short work of India's 256-run target, romping home in 37.4 overs without losing any wicket in the first ODI at the Wankhede Stadium in Mumbai.

Warner (128*) and Finch (110*) shared a record 258-run partnership—the highest for any wicket against India in ODIs—to make a mockery of the run chase.

Almost all the Indian bowlers were taken to task by the Aussie duo, with India's comeback man and potent weapon Jasprit Bumrah bleeding 50 runs in seven overs.

Warner and Finch simply ran away with chase, sharing 30 boundaries and five sixes between them. Their unbeaten stand ensured India's first 10-wicket loss since 2005.

Earlier, after being put into bat, India were all out for 255, with Shikhar Dhawan top-scoring with a 91-ball 74. The southpaw, in the company of K.L. Rahul (47), shared a second-wicket stand of 121 runs off 136 balls to set the base for India's total. However, India failed to capitalise.

India were dealt an early blow when they lost Rohit Sharma (10), caught by David Warner at mid-off off Mitchell Starc (3/56).

Rahul joined Dhawan at the crease and the duo played fluently without much trouble against a formidable Australian attack.

Just three short of his fifty, Rahul gave a straight forward catch to Steve Smith at covers off Agar and then, in the next over, Dhawan was caught by Agar off Pat Cummins (2/44).

While Rahul hit four boundaries during his 61-ball knock, Dhawan's innings was laced with nine fours and one six.

Dropping himself to No. 4 to accommodate both Dhawan and Rahul in the side, Virat Kohli (16) was in attacking mode from the onset, but didn't last long as Zampa took a sharp catch off his own bowling to dismiss the Indian skipper.

Shreyas Iyer followed suit when Starc induced an edge an over later and Alex Carey did the rest behind the stumps.

Rishabh Pant (28) and Ravindra Jadeja (25) shared 49 runs for the sixth wicket before the duo perished in consecutive overs as India lost the plot.

Towards the end, Kuldeep Yadav (17) and Mohammed Shami (10) struck some useful boundaries.

The manner of India's defeat, which came after dominating limited overs series wins against West Indies and Sri Lanka, has left the hosts with plenty to ponder ahead of the second game in Rajkot on Friday. It was also India's fourth straight loss against the Aussies at home.