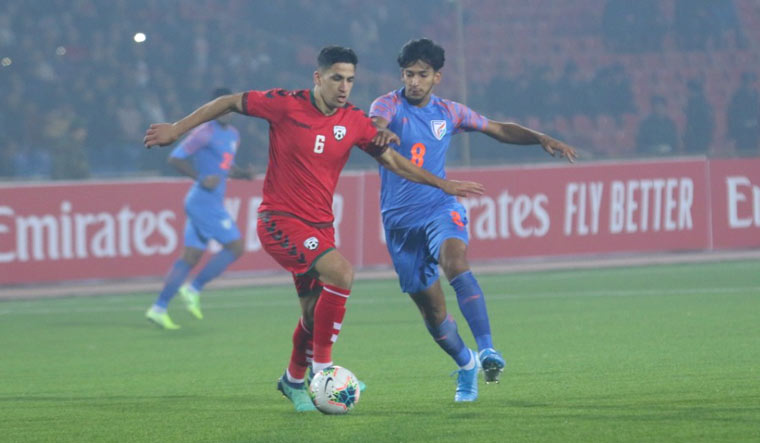 Action from the FIFA WC Qualifier match between India and Afghanistan in Dushanbe, Tajikistan | via Twitter

An injury-time goal from Zelfy Narzary in the first half saw Afghanistan going into the half-time break leading 1-0 against India in the FIFA World Cup Qualifier, in Dushanbe, Tajikistan.

With both teams seeking a win to remain in contention in Group E, the match started on a wary note. Though India started on an attacking note, the Afghans gradually found their groove.

Afghanistan were forced to make an early substitution in the 12th minute owing to an injury. But it hardly dented their attacks on the Indian goal. A poor tackle from Mandar Rao Desai gave Afghanistan a free-kick just outside the box in the 25th minute but Adil Khan managed to head away the resultant free-kick to safety.

India got a chance against the run of play in the 28th minute, with Ashique Kuruniyan shot off a Sahal Abdul Samad pass flying inches from the top corner of Afghanistan's goal.

But the sustained pressure from the Afghanis finally bore fruit in the added time of the first half. David Najem got a through ball on the right and cut it back into the middle, and Narzary smashed it past Indian custodian Gurpreet Singh Sandhu.

India are now at fourth place in the Group E table with two points from three matches. With the runner-up in the five-team group not even assured of a third round slot, India cannot afford to lose against Afghanistan.

The Afghans, who are 149th in FIFA rankings against India 106th position, are placed third in the group with one win and two losses.