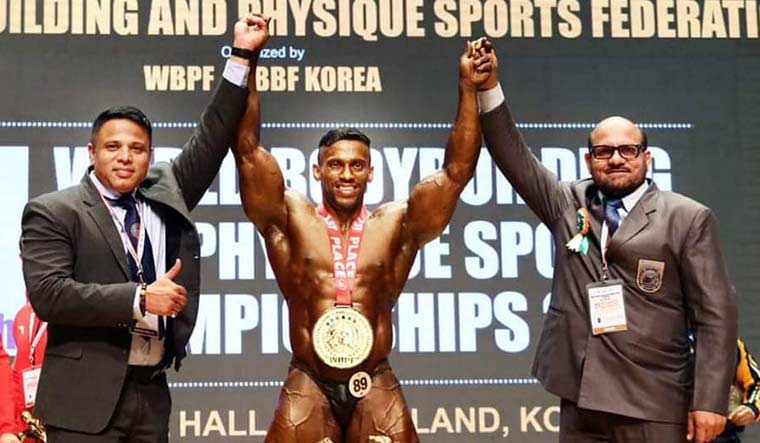 'The Indian monster'. It's a misnomer, really, for Chitharesh Natesan, the Delhi-based bodybuilder from Vaduthala, Kochi. His achievements, however, are monstrous. On November 10, he became the first Indian to win the Mr Universe 2019, and Mr World 2019 titles at the World Bodybuilding and Physique Sports Championship held in South Korea.

He first won the Mr World 2019 title in his 90kg category and then competed with the winners of nine other weight categories (ranging between 55kg and 110kg) to emerge as the overall champion and Mr Universe 2019. Chitharesh had attended the trials for the World Bodybuilding and Physique Sports Championship, in June in Andhra Pradesh.

“I am thrilled,” said Chitharesh to THE WEEK. “It's a great honour to represent India and win Mr World 2019 and Mr Universe 2019 titles.” India secured the second position in the World Bodybuilding and Physique Sports Championship, with six gold, 13 silver and four bronze.

He returned to New Delhi, where he works as a fitness trainer, to a hero's welcome. His fans and friends took out a bike procession, with him in an open jeep. A sport that he is, Chitharesh obliged them with shirtless poses and joined in the fun and frolic.

Despite his humble background, Chitharesh completed his schooling at SRV High School. He did BA in History at the Maharajas College in Kochi, where he was the captain of the hockey team. He was an avid hockey player but gradually turned to bodybuilding later. After doing a course at the Lakshmibai National College of Physical Education in Thiruvananthapuram, he went to New Delhi to work as a fitness trainer.

It was here he met M.V. Sagar, who later became his friend and trainer. Chitharesh went on to win Mr Delhi four times and Mr India in 2015. He has been winning the titles ever since. He also won the Mr World title in 2018. The high point came this year, when he won the International Bodybuilding and Fitness Federation Mr Asia 2019 overall champion title in Indonesia in September.

The Mr Universe title at the World Bodybuilding and Physique Sports Championship in South Korea had been his target since. But sponsorship remained, and still remains, a major hurdle for him.

“The Indian Body Building Federation bore all the expenses to send us to South Korea. It has been a big help.”

The expenses for the 33-year-old's training and diet, understandably, eats into much of what he earns as a fitness trainer in New Delhi. And so, Mr Universe 2019 is job-hunting now! “There are some openings in the Customs, Railways and Income Tax departments. I am trying. Let's see.”