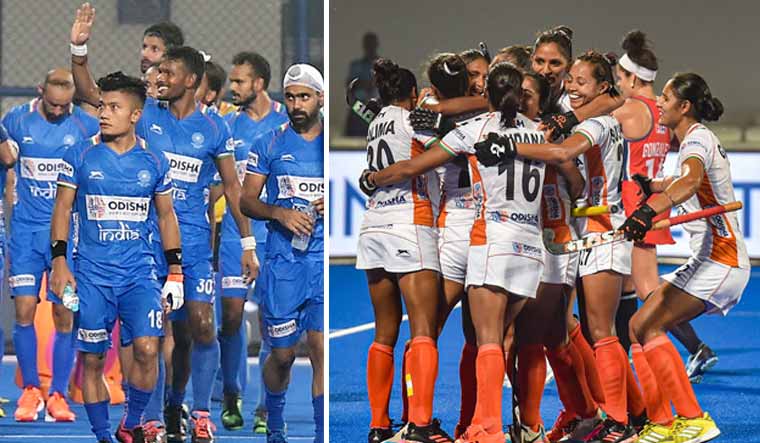 India got off to a grand start in its Hockey Olympic Qualifiers on Friday, with both the men's and women's teams winning the first leg of the two-match International Hockey Federation (FIH), with the men’s team beating Russia 4-2 while the women’s team beat the USA 5-1.

While the men’s team struggled against Russia initially, the women’s team breezed through the competition with a near-flawless performance at the Kalinga Stadium, Bhubaneswar.

Both men and women’s team will want to retain their leads in the second match in order to proceed. 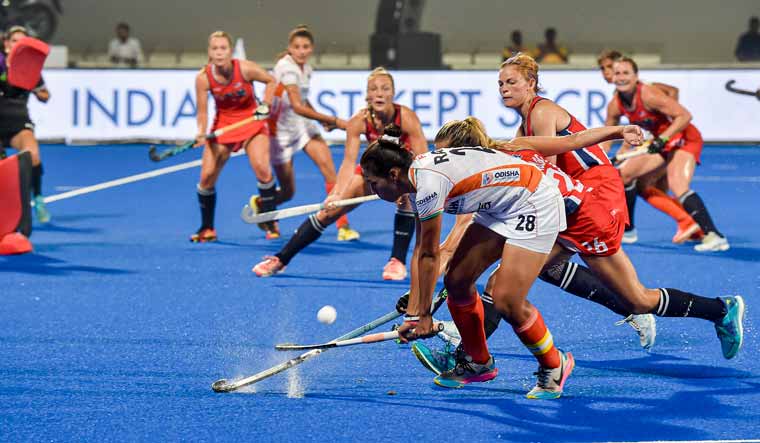 USA's consolation goal came from a penalty stroke converted by Erin Matson in the 54th minute.

Ranked ninth in the world, India now need to defend their four-goal advantage in Saturday's second and final-leg to seal their Tokyo 2020 ticket.

The Indians exerted early pressure on the Americans but failed to create any clear cut opportunities.

USA got their act together over time and had a clear sight of goal in the seventh minute, but Alyssa Parker shot wide from top right of the striking circle with only Indian goalkeeper Savita to beat.

After a rather action-less opening quarter, the match livened up in the next 15 minutes.

India got their first scoring chance a minute into the second quarter but Sharmila Devi failed, in the far post, to get her stick on to a cross from Lalremsiami.

Chances came thick and fast in the second quarter as four minutes later, Indian goalkeeper Savita pulled off a fine save to deny Lauren Moyer's reverse shot from close range.

USA counter-attacked and secured their opening penalty corner in the very next minute but skipper Kathleen Sharkey shot wide. Soon, USA got their second penalty corner but once again the visitors wasted the opportunity.

A minute later, Sushila Chanu's shot from top of the box was saved by the American goalie but from the rebound India secured their second penalty corner, which resulted in another.

Sushila failed to stop the push but from the ensuing move, an unmarked Lilima, stationed at the far post, tapped it in to break the deadlock.

The late goal in the second quarter seemed to have worked wonders for the Indian girls as they completely dominated the third quarter, pumping in two more goals to take a commanding 3-0 lead.

India earned two more penalty corners in a span of four minutes but on both occasions, Gurjit Kaur was denied by USA goalie Bing.

But kept up the pressure on the American defence and soon doubled their lead in the 40th minute when Sharmila deflected in from close range after she was set up by a move from Navneet Kaur and Lilima.

Within 30 seconds of the start of the fourth quarter, India extended their lead from a counter-attack when Navneet collected a pass from Salima Tete inside the 'D' before slamming the ball into the bottom right corner.

India rounded off the tally in the 51st minute when Gurjit scored from the spot after they were awarded a penalty stroke for Margaux Paolino's foul inside the circle.

USA pulled one back soon from a similar scenario, a penalty stroke converted by Matson.

Barring a few instances, India coach Sjoerd Marijne was pleased with the performance of his team.

"Making use of opportunities is a quality, which we did pretty well today. You could see we played to our potential. We were really effective," he said.

"The speed of Sharmila and Salima, who are just 17 and 18, were brilliant."

Marijne begs to differ that the 5-1 scoreline has taken his side on the thresh-hold of an Olympic ticket.

"Absolutely not. We haven't got the ticket to Tokyo today, we can get it tomorrow. We have nothing so far," he said.

"We were up 5-0 and wanted to keep that scoreline. But we fell back a bit too much and need to improve on that tomorrow." 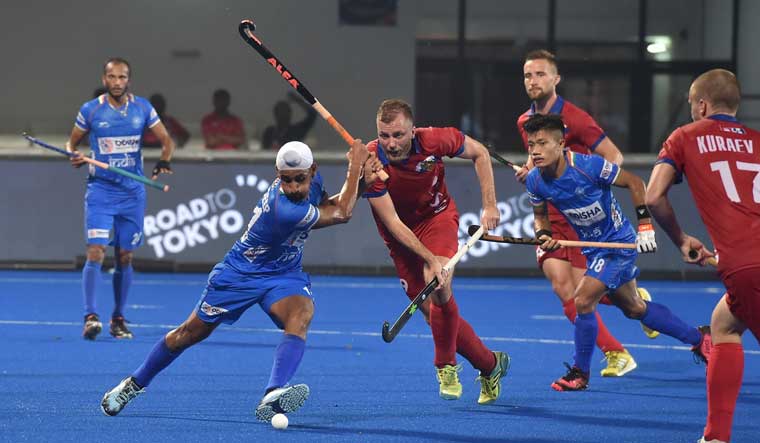 Mandeep Singh struck twice as a below-par India struggled past minnows Russia 4-2 in the first leg of the two-match hockey Olympic Qualifier in Bhubaneshwar on Friday.

It was expected to be a 'David vs Goliath' contest going by the class and vast gap in world rankings between the two teams but world no. 22 Russia dished out a fighting effort to surprise the hosts and keep the difference of goals to just two.

World no.5 India still can't breath easy as Russia clearly showed they are capable of creating an upset in the second and final match on Saturday. The aggregate winner at the end of the two-match qualifier will seal its place for the 2020 Tokyo Games.

Russia had the first shot at the goal in the third minute with Pavel Golubev showing quick-thinking from a free-hit, taking it himself but his backhand effort was blocked by India goalkeeper PR Sreejesh.

Two minutes later, Russia goalkeeper Marat Gafarov was called into action by India captain Manpreet Singh, whose first shot was saved but was fouled as he attempted his follow-up. The hosts made good use of the video referral to get a penalty stroke and Harmanpreet made no mistake.

India were dominant but it was far from a cakewalk for the hosts as two minutes later Sreejesh was forced to make another save before the Russians won a penalty corner. However, the chance went wasted because of a miss-trap at the top of the circle from Iaroslav Loginov.

But two minutes into the second quarter, India were in for a shock as Russia equalised through a field strike from Andrey Kuraev, who after receiving an overhead pass, cut across the top of the circle before guiding his shot into the bottom left corner past India's second goalkeeper Krishan Bahadur Pathak.

Minutes later, a diving Sergey Lepeshkin almost handed Russia the lead but his angled deflection from Evgeny Artemov's pass from the right missed the top corner of the Indian goal by a fraction.

India, however, restored their lead in the 24th minute through Mandeep, who thrashed home a backhand strike into the bottom left corner past Russia goalkeeper Gafarov.

Just at the stroke of half-time, India secured their first penalty corner but Harmanpreet's try was comfortably kept away by Gafarov as the hosts went into the break with a slender 2-1 lead.

The Russians continued their good show and made a bright start to the third quarter creating two good chances, the second of which almost produced the equaliser. Marat Khairullin received the ball unmarked in the Indian circle and smashed a blistering backhand strike just wide of the goal.

Russia matched their fancied opponents stick-for-stick but India, somehow, managed to hold on to their slender lead at the end of the third quarter.

After wasting their second penalty corner, India finally got some breathing space by extending their lead in the 48th minute through Sunil, who scored from close range following a goal-mouth scramble.

Mandeep scored his second goal of the day in the 53rd minute from a counter-attack to make the scoreline 4-1 in favour of the hosts.

Russia scored a vital second goal in the final minute of the match through a penalty corner conversion by Semen Matkovskiy.