Gujarat will soon have world's largest cricket stadium: All you need to know 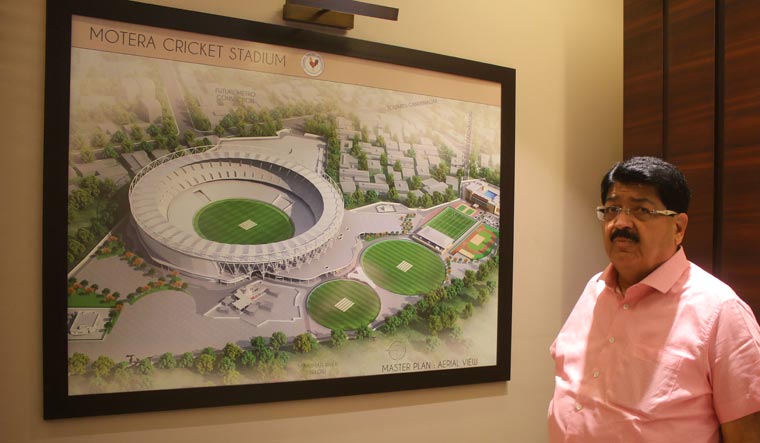 Parimal Nathwani, senior vice-president of the Gujarat Cricket Association, with the master plan of the Motera Cricket Stadium | Janak Patel

In a country where cricket is a religion, here's a 'temple' like no other. If everything goes as planned, in a few months, India will have the world's largest cricket stadium.

The Sardar Patel Stadium or the Motera Cricket Stadium is in the final stages of completion in Ahmedabad, Gujarat—a state which has given the Indian cricket team stars like Jasprit Bumrah, Hardik Pandya, Cheteshwar Pujara and Ravindra Jadeja. It will have a whopping spectator capacity of 1.10 lakh—higher than the Melbourne Cricket Ground in Australia, which can accommodate 1,00,024 spectators.

Sprawled across 64 acres, the stadium does not stop with the main ground. It will have two cricket grounds with small pavilion areas, indoor practice pitches, training centre and a 55-room club house, which will have an Olympic size swimming pool, badminton and tennis courts, squash arena, table tennis area and a 3D projector theatre. The complex will also have hockey and football grounds and a kabaddi area.

The idea to make a new stadium in place of the old stadium which had a capacity of about 50,000, came up months before the then chief minister of Gujarat, Narendra Modi, was to move to New Delhi as the prime minister. Parimal Nathwani, senior vice-president of the Gujarat Cricket Association, told THE WEEK that as president of the GCA, Modi took much interest in cricket. “When we discussed the plan with him about redoing structure at the pavilion end, he asked how old the structure was. When I said it was 25 years old, he said it would be better to build a new stadium,” he said. 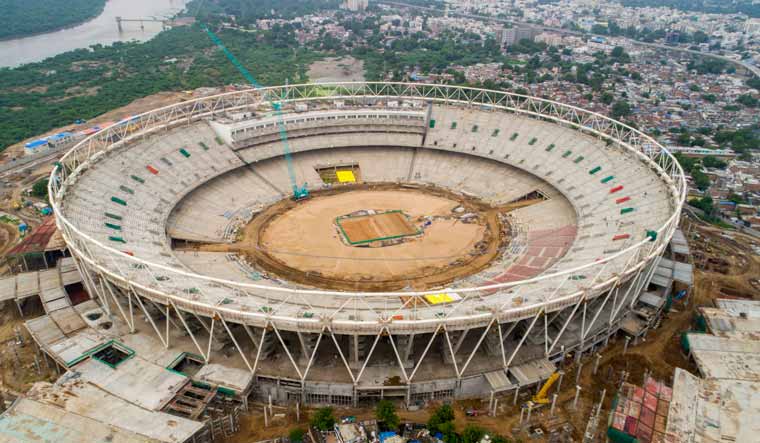 According to Nathwani, when Modi was informed about the capacity of Melbourne Cricket Ground, which is currently the largest, he asked them to go ahead with a capacity of 1.10 lakh for the Motera stadium.

The stadium will be another structural marvel after the world's tallest statue—the 182-m high Statue of Unity—which was inaugurated last year in Gujarat.

Designed by Populous company, which designed the Melbourne Cricket Ground, the stadium is being built by L&T. In addition, the GCA has appointed STUP Consultants Private Limited to monitor the project. There is also a team of 25 professionals supervising the work and coordinating with L&T and STUP.

The earthquake-proof structure will be connected to the metro station. “In less than 300m, after disembarking the metro, the spectators will be able to reach the stadium,” said Nathwani. A huge ramp has been designed to facilitate movement of 60,000 people at a time.

Another unique feature of the stadium will be LED lights—a first in India. “Unlike the floodlights in the stadium complex, at Motera, we will have LED lights all over the stadium,” said Nathwani, also a Rajya Sabha member.

The LED lights will be installed on a canopy that has PTFE membrane. The cover is anti-bacterial, fire-proof and sourced from Japan. This is unlike the normal iron sheets that are used to cover some areas of the stadium. The canopy would cover 30m of the 55m seating area.

There will be 75 corporate boxes, each with a capacity of 25, according to Nathwani. There will be 19 lifts for the VIP section. 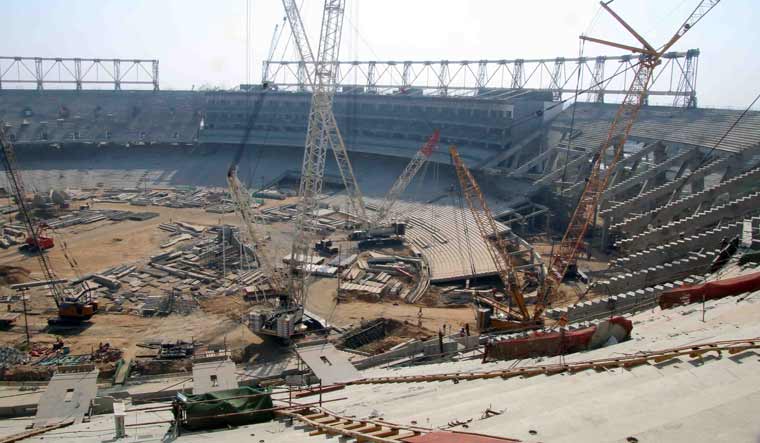 Union Home Minister Amit Shah, who became the president of the GCA once Modi moved to New Delhi, insisted on transparency and quality of work, according to Nathwani.

Shah told THE WEEK that the new stadium would be the pride of India. “This project is the vision of our Prime Minister Narendra Modi. It was his dream that India should have the world's largest and best-in-class cricket stadium.

“Our endeavour at GCA is to work in the best interests of cricket and ensure that India continues to retain its leadership of the game at home and across the world,” Shah said.

When the tenders were floated, one of the key criteria was that the company should have an annual turnover of Rs 2,000 crore for three consecutive years and an experience of building a stadium. Apart from L&T, Shapoorji Pallonji and Nagarjuna Construction Company Limited submitted bids.

The bids were opened in front of K.R. Vyas, retired chief justice of Mumbai High Court, who was appointed by the GCA. In fact, the covers were interchanged and given to the bidders to open.

With Rs 300 crore in its hands, the GCA took another Rs 300 crore as loan. It plans to raise Rs 150 crore from the corporate boxes and an equal amount from the club membership, which is likely to be kept around Rs 7 lakh, Nathwani said. The GCA is likely to get around Rs 75 crore from the BCCI as its share. He said that the GCA expects to pay off the loan in about three-and-a-half years after the matches begin.

Claiming that about 92 per cent work is over, Nathwani said that the stadium should be ready in 4-5 months. He said that to begin with, they are planning a T20 match between World XI and the Indian cricket team.

Rajiv Sharma, project manager, STUP, told THE WEEK that the designed life span of the stadium is 100 years.

The stadium has a podium level—also called concourse—of 4.5 lakh square feet where food and beverage will be available for the spectators of the upper and lower bowl. There is also provision for solar power generation and 65 rainwater harvesting pits, according to Nathwani.