India-WI Test: Vihari, Rahane gradually taking it away from Windies 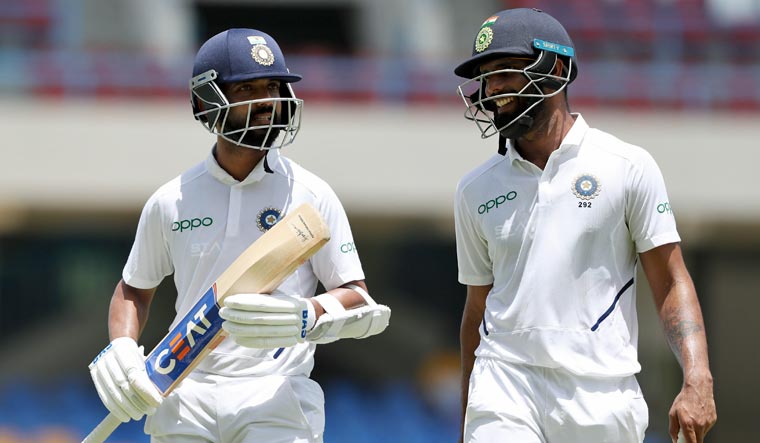 Ajinkya Rahane (L) and Hanuma Vihari walk to lunch after the first session of day four of the first Test cricket match against West Indies at the Sir Vivian Richards cricket ground in North Sound, Antigua and Barbuda, on Sunday | AP

Ajinkya Rahane remained on course to score his first Test century in two years while Hanuma Vihari hit a fluent fifty as India tightened their grip over the West Indies in the series-opener, here on Sunday.

Vihari (57) and Rahane (90) raised an unbeaten 100-run partnership for the fifth wicket after India lost skipper Virat Kohli, taking India to 287 for four at lunch on the fourth day for an overall lead 362.

Rahane, who scored 81 in the first innings, has not scored a Test hundred since his 132 against Sri Lanka in August 2017.

For Vihari it's only his second Test fifty.

Resuming at 185 for three, India lost Kohli (51) when his leading edge off Roston Chase flew to John Campbell, who took the catch on second attempt.

That ended the fourth-wicket partnership between Kohli and Rahane that yielded 106 runs for India.

The other overnight batsman Rahane was joined by Vihari, who easily worked the ball around in gaps to keep the scoreboard ticking.

Holder now made it all-spin attack by introducing John Campbell from the other end.

As soon as the new ball was available, pacers Kemar Roach and Shannon Gabriel operated in tandem but before that West Indies part-timers had bowled 41 overs in this innings alone.

While Roach and Gabriel bowled a few testing deliveries, it largely remained an untroubled stay for both Rahane and Vihari.

Opener Mayank Agarwal (16) was the first wicket to fall for India in the second innings, trapped by Chase in the 14th over although TV replays showed the ball was missing the leg stump but the batsman didn't go for review ion Saturday.

Rahul, however, gave away his wicket, bowled by Chase. He went across his stumps while going for a sweep, only to expose all the three stumps and the West Indian spinner stuck as the batsman failed to connect the ball.

An over later, Roach went through Pujara's defence to reduce India to 81 for three.

Before that, India bowled out West Indies for 222 in 74.2 overs in their first innings in reply to 297 with Ishant Sharma returning with best figures of 5 for 43.