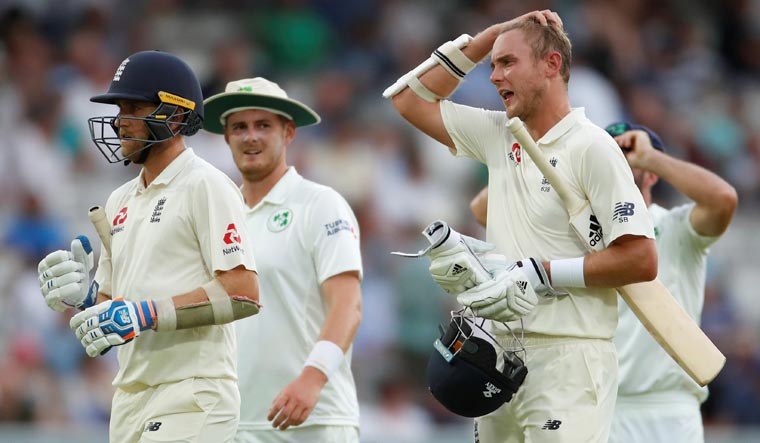 England's Stuart Broad and Olly Stone react as they walk off after the umpires suspended play against Ireland, due to the threat of thunder and lightning at Lord's | Reuters

Rain forced an early end to an interesting session of play on day 2 of the one-off Test between England and Ireland at Lord's. England were reduced 303/9 when umpires stopped play due to bad light. Rain followed soon after, forcing them to call stumps.

England have a 181-run lead now, with Ireland having scored 207 in their first innings. The hosts will be hoping to take the lead past the psychological mark of 200, with all-rounder Stuart Broad (21*) and Olly Stone (0*)—who made 19 in the England's disastrous first innings—at the crease.

Before bad light stopped play, Ireland rocked England after nightwatchman Jack Leach fell just short of what would have been a remarkable Test hundred as the visitors pressed for a shock victory.

Leach made 92, his highest first-class score, after being sent in as a nightwatchman on Wednesday.

That was more than the 85 all out England, with Leach at number 11, managed between them in their first innings as veteran Ireland seamer Tim Murtagh took 5/13 on his Middlesex home ground on Wednesday.

Leach, who had been in sight of an achievement that eluded batting greats Brian Lara, Ricky Ponting and Sachin Tendulkar—a Test hundred at Lord's—walked slowly off to a standing ovation after batting for 220 minutes and facing 162 balls, hitting 16 fours.

Leach and Test debutant Jason Roy, who made 72, put on 145 for the second wicket.

But from 171/1, England lost four wickets for 23 runs as they slumped to 194/5 in what is Ireland's first Test against them and just their third in total.

England resumed on their overnight 0-0 after Ireland had made 207, featuring Andrew Balbirnie's 55.

The one-off fixture was scheduled to last four days, rather than the standard five for a Test.

Wednesday had seen England bowled out in a single session for the fourth time since 2016, a worrying sign ahead of an Ashes series that starts next week.