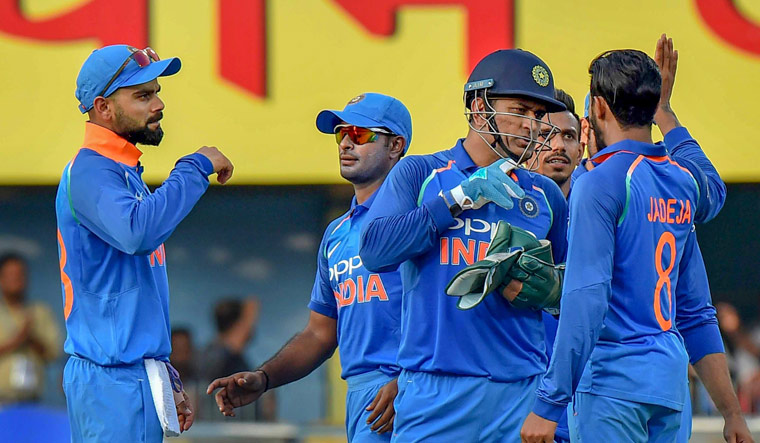 India captain Virat Kohli won the toss and elected to bat first against West Indies in the second ODI of the five-match series in Visakhapatnam on Wednesday.

West Indies, in a bid to fight back after the humiliating Test series loss against India, lost the first ODI despite putting up a formidable score of 322. Skipper Virat Kohli and Rohit Sharma hit match-winning tons to put on a massive 246-run stand for the second wicket. Shimron Hetmyer's knock of 106 from 78 balls was the only silver lining for the West Indies in the match.

The hosts will look to carry the momentum into the rest of the series.

The absence of pacers Bhuvneshwar Kumar and Jasprit Bumrah has left India without a fixed bowling attack. Shardul Thakur is also out for at least seven weeks with an injury.

Kuldeep Yadav, who missed the first ODI in Guwahati, is expected to join Yuzvendra Chahal and Umesh Yadav, making either Ravindra Jadeja's or Khaleel Ahmed's place in the team uncertain.

Skipper Kohli, meanwhile, is looking at breaking the record of the fastest 10,000 ODI runs, currently held by Sachin Tendulkar. Kohli is short of 81 runs to achieve the feat. Tendulkar reached the milestone in 259 innings, and Kohli has so far played 204 innings.

West Indies will get the opportunity to level the series if the likes Kemar Roach, Jason Holder and Devendra Bishoo pull up their socks. Hetmyer will also be expected to continue his batting exploits for the visitors.