Asian Games: IOA to send Sharan, Sacheti at their own cost 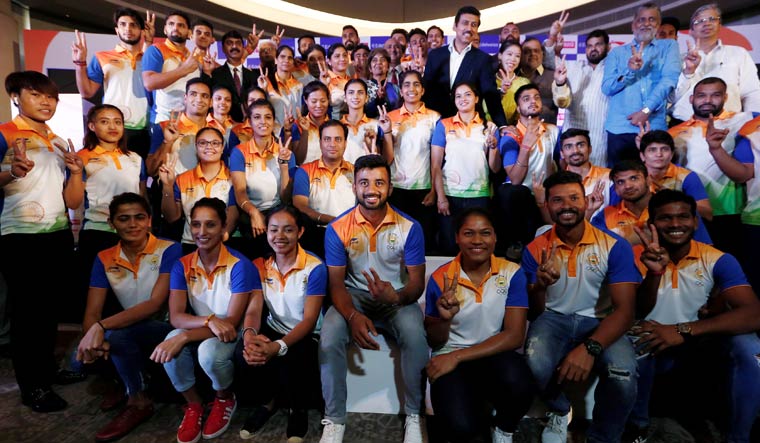 Members of the Indian contingent, participating in the 2018 Asian Games, pose for a picture during a send-off ceremony in New Delhi | Reuters

The Indian Olympic Association has decided to send Chef de Mission Brij Bhushan Sharan Singh and his deputy Rajkumar Sacheti at the Asian Games on its own expense after the sports ministry questioned the latter's presence in the contingent.

The IOA had named Wrestling Federation of India (WFI) chief Sharan as the CDM with his four deputies being Sacheti, Col Satyavrat Sheoran, Balbir Singh Kushwaha and Dev Kumar Singh.

It is learnt that the sports ministry had expressed its unhappiness at Boxing Federation of India (BFI) executive director Sacheti's inclusion as one of the four deputy Chefs de Mission as the Chief Vigilance Commissioner (CVC) had recommended registration of a disproportionate assets case against him in 2013 in the wake of the 2010 CWG corruption scandal.

Sacheti worked as joint director-general in the 2010 Commonwealth Games organising committee (OC) and was one of the aides of former IOA president and head of 2010 CWG OC Suresh Kalmadi who was jailed and then released on bail.

The IOA, however, refused to budge from its decision and said that it will send the Chef de Mission and his four deputies, besides another seven office staff, on its own cost. It has submitted to the sports ministry a list of 202 officials from various federations, whose athletes are taking part in the Asian Games for clearance.

"We have submitted a list of 202 officials from various federation to the sports ministry for clearance. We are not submitting the list of our own 12 officials, including CDM and four CDMs, to the ministry. They do not need clearance from the sports ministry and we are sending them to Indonesia on our cost," said IOA secretary Rajeev Mehta.

Asked about Sacheti's inclusion as a deputy Chef de Mission, Mehta said,"We have officially asked Sacheti to furnish in writing what was the actual position and he gave us in writing that there was no case or investigation going on against him by the CVC and we have accepted his explanation."

Another IOA official wondered why the government would have reservation about Sacheti only now after being associated with him in various capacities in the past.

The accreditation of all these 12 officials have come and IOA president Narinder Batra today said during the contingent send-off ceremony that the first batch of the Indian officials will leave for Indonesia tomorrow. The welcome ceremony of the Indian contingent will be held on August 16.

All the National Olympic Committees under the Olympic Council of Asia will get office spaces inside the Games Village and the IOA will have to set up one with own support staff.

However, ahead of the Commonwealth Games in Gold Coast, the sports ministry had struck down the name of Arun Mendiratta as Chief Medical Officer of the contingent.

The IOA had then sent a full list of its own officials, including the Chef de Mission and his two deputies.